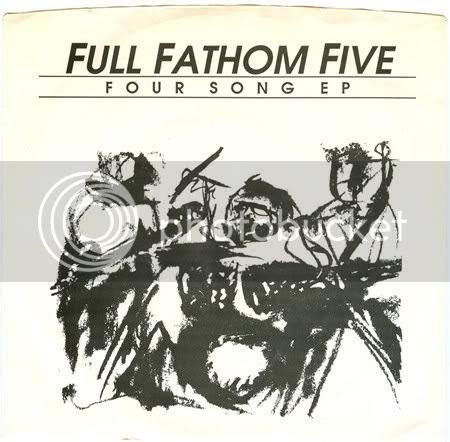 Full Fathom Five are a band that I discovered one of my favorite ways, which is walking into a show having no idea who half the bands are and then getting blown away by one of the openers. In this case it was at T.T.'s up in Boston, and I think Full Fathom Five were opening for Big Dipper; there were maybe only a handful of other people besides me who had gotten there early enough to catch Full Fathom Five's set, which was awesome; equal parts Pere Ubu, the Zero Boys, and "Metal Circus". I went right over to them after their set and bought a copy of the only record they had out at the time: a copy of this 4-song EP, which they sold to me for a measly two bucks (hooray for the Eighties!).

Make no mistake, the guitar sound on this EP is absolutely punishing. Sometimes FF5 will let the song drift away from center, like on "Why Their Faces Are So Worn" (which moseys along at a mostly alt-country pace) or "The Man with The Concrete Face", but that's only so when the main riff kicks in it'll knock you on your ass. Even the least of the four songs on here, "All The Heroes Must Die" (imagine what The Cult's "Fire Woman" would sound like if A Dying Gymnast* tried to ruin it), is saved by a monster guitar riff.

Full Fathom Five flattened their sound out a lot and took a more pop direction with their later releases; I have their 1989 LP, "Multinational Pop Conglomerate", on vinyl, and it's no more than completely adequate college rock. Willfully Obscure did a good job of posting the last two Full Fathom Five LPs, if you're interested. 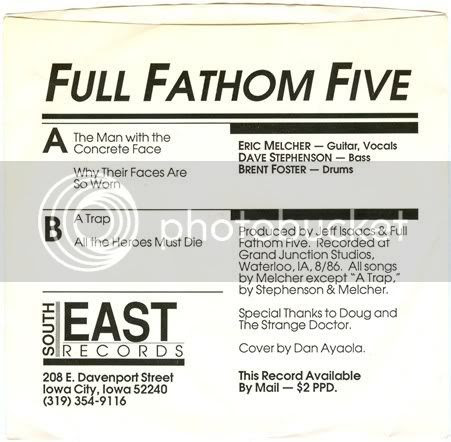 "The Man with The Concrete Face"

"Why Their Faces Are So Worn"

"All The Heroes Must Die" 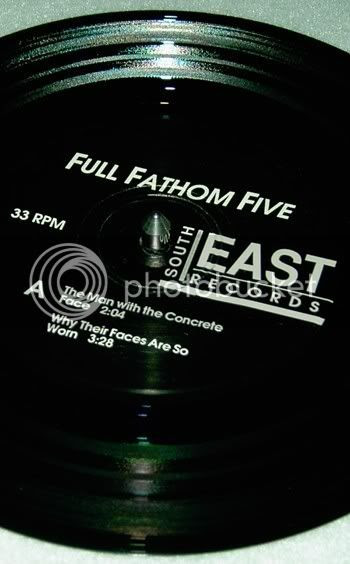 Pretty much slapped-together by Brushback at 3:47 PM

Punish me with sound.

Any way I can get you to e-mail these tracks to me. I guess I thought I had bought all their releases years ago. This 45 smokes!! Maybe I can trade you some tunes via e-mail?

I just picked this up for a buck. I think I caught them in early 88 at the Anthrax. I remember liking them, but I never saw an album out. Definitely a great buy.

Since you are from Boston, did you ever check out Gitter's band Apology? It's a little cheesy but there is something about that album I love until this day.

I remember another band Gitter had, too, called Grin-- but I never checked any of his bands out. The guy was too dubious (musically) for me.

Not really from Boston, though I used to spend a lot more time there.

can you please send me the mp3 files of the EP?

A friend from Greece

Thank You very much
Efstathiou Stathis

I hope you got everything okay..

Unfortunately, I have not received anything at all.
Can you send it again?

Maybe the size of the attachment held it up... I just re-sent it again now.

I have received the files.
Thank You