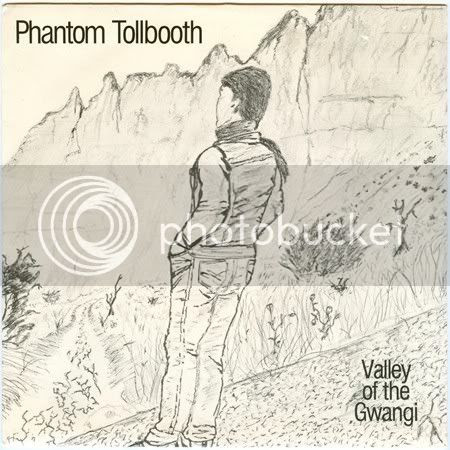 Phantom Tollbooth took something Burma-like, replacing the melody with something that was a bit more metal. At least that's the best way I could describe them back then, since there wasn't as much of a template for what they were doing as you'd find now.

Besides creating the Gerard Smith School of Functional Vocals (very important to the future of limited-ability indie rock), Phantom Tollbooth were also just about the worst interview ever-- or at least they were when I tried talking to them, back in '86 when all they had out was this 7-inch, I think. I know I didn't even bother saving the interview tape, most likely recording a Nip Drivers album over it a week later. Alright, so maybe it wasn't all their fault, as they were one of the first non-hardcore bands that I ever tried to interview, plus I brought a clipping with me of the Mary Poppins-type movie that they named themselves after, which they didn't seem to think was too clever.

Neither one of these songs is too hard to find, either as this record or on other things, but I'll cover them here anyway. "Valley of The Gwangi" starts off like it's gonna be an instrumental, but there's singing eventually as well as a discernable melody, so that's good. "Flip Your Lid" (or "Flip Yr Lid", if you're one of those types) drops the riff from Aerosmith's "Sweet Emotion" in between the verses, which is really cool. Of course, you're probably gonna tell me that it sounds nothing like "Sweet Emotion", just like most people tell me "Smells Like Teen Spirit" doesn't sound like "More Than a Feeling" or "Godzilla". Fine, have it your way, Mr. Alternative.

By my count this 7-inch was the best thing Phantom Tollbooth ever did, since I didn't like the 12" that followed all that much and sorta stopped listening to them after that. I don't think it was just me holding a grudge or whatever, because I listened to their first 12" earlier this week and still didn't like it, plus I've heard bits and pieces of the Robert Pollard thing and it's sorta crappy. 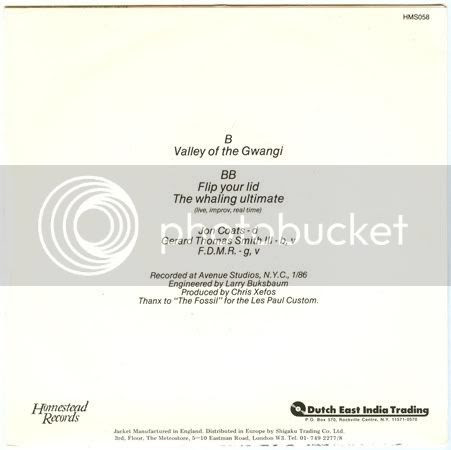 "Valley of The Gwangi" 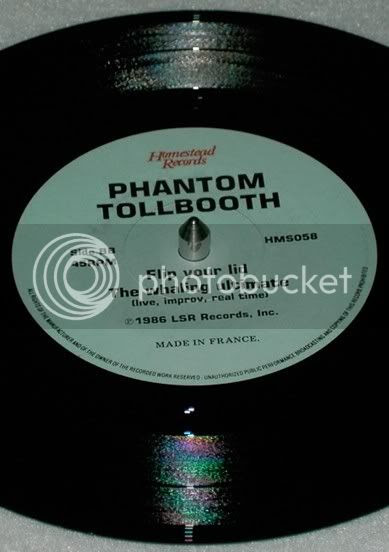 Pretty much slapped-together by Brushback at 9:32 PM

I've heard bits and pieces of the Robert Pollard thing and it's sorta crappy.

"SORTA crappy?" Dave, that LP is the nadir of Pollard's career so far (and that includes the 48 LPs he's released this year). How anyone agreed to make that vinyl excrement for public consumption is beyond me.

That's me attempting to be diplomatic.

I can never get over the fact that one of these guys is partly responsible for that insipid King Missile cut "Detachable Penis"..I'll take Great Plains or Antietam over them anyday, but still cements my opinion that Homestead was one great label to have dumped on you in your formative years! -Sean/Wires In The Walls

Homestead's early releases are staggering. I mean, no one else but Gerard had the insight to put out this stuff back then, so it's no wonder all of these bands gravitated towards Homestead, but check out this set of releases just as an example:

This isn't even getting into the Sorry, Squirrel Bait, Green River, Proletariat, Dredd Foole, Big Black etc. stuff which was right around the corner.

was it BLESSED FREAK SHOW or DESTROY WHITEY?

HA! It would've had to have been Oh Blessed Freak Show, because I've never gotten my hands on an actual vinyl copy of Destroy Whitey.

I don't know, I recall that I was charmed by the Mary Poppins reference.

That's not how I remember it.

The mp3 files on this post are now listen-only (non-downloadable) files. TOUGH LUCK, CHARLIE! No, actually, for those of you who missed the boat, I will do my best to respond to any e-mailed requests for the original files. Unless you're Dave Rick or Gerard Smith.