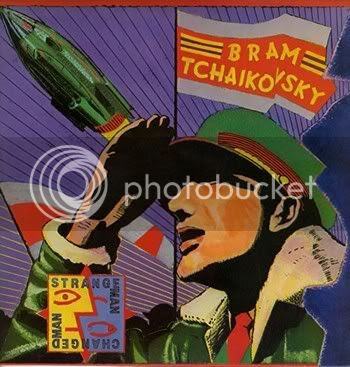 When ib dropped the name "Bram Tchaikovsky" in the comment section a couple of weeks ago, it instantly brought to mind one of the formative episodes of my youth, when Bram (aka British pop-punker Peter Brammal) snuck a brilliant song about humping a blow-up doll onto the American pop music charts.

I was in grade school and living in Maine during the mid-to-late 70's, at a time and place when now-lowly AM radio had all the Top 40 stations and was the dominant format. FM radio was more progressive, of course, only there wasn't an FM rock station within 60 miles of where I lived. So, the big-time radio station that I first started listening to as a kid was WGUY, a Top 40 station that had all the wacky DJs and "be the 12th caller" contests that Top 40 radio still has today, only it was an AM "daytimer" station, meaning it went off the air at sundown! Things improved a little bit when Z-62 went Top 40 a couple of years later, since they were able to broadcast at night, but it was still "just" AM radio.

Of course, things that seemed cool back then look pretty bleak now, and I clearly remember a summer day when I was 12 or 13, playing Little League baseball while some high school kids drove around the school parking lot blasting Foghat and The Steve Miller Band on their car radios (it was Maine, there wasn't much else to do). Steve Miller's "Greatest Hits" and Fleetwood Mac's "Rumours" were the two big AM radio staples at the time and they were better than disco, sure, but it wasn't what I wanted to listen to all of the time. Once I saved up enough to buy my own cassette player, I finagled copies of AC/DC's "Let There Be Rock" and Cheap Trick's "Live at Budokan" and wore those suckers out. Other than that, I spent a lot of time sitting next to the radio with my finger on the "record" button, waiting forever for a song that I liked to come on, and in that way built up a library of tapes to listen to. By now we're talking '78 and '79, and what I liked the most on commercial radio back then were songs like Sniff 'n' the Tears' "Driver's Seat", and Ian Gomm's "Hold On", and a song by some Beethoven-name-type guy, Bram Tchaikovsky or something, called "Girl Of My Dreams". I thought "Girl Of My Dreams" was pretty much the greatest song ever, even though I had no clue what it really was about.

Some years later I'm living in Connecticut and flunking out of college; I'm also working part-time at a record store that has a copy of the Bram Tchaikovsky album in the used bin, giving me the chance to sit down and listen to it more closely. That's when I finally sniffed out what "Girl Of My Dreams" really meant, and I got a good chuckle out of it.

Of course, it's a lot easier now to find out stuff using the internet, which is how I found this mp3 a couple of years ago-- on a British web page (not a blog) that had a bunch of British punk songs archived, and some other stuff too. "Girl Of My Dreams" was one of the songs that I downloaded from the list (thinking ahead to this very occasion), as well as the Cockney Rejects' "Oi! Oi! Oi!", and "Another Girl, Another Planet" by The Only Ones, thank you very much. Since then I've seen "Girl Of My Dreams" posted on a number of music blogs, though they always skip over the rubber doll aspect even though it's the most interesting part. And it's still one of the greatest recordings ever, I think.

"Girl Of My Dreams" (this file is now listen-only)

Judy was an American girl,
She came in the morning with the U.S. mail
She didn't say nothing, but she looked pretty good to me
Golden hair that shined so bright,
Loving eyes that seemed out of sight
She could keep the secrets that we shared in my world of dreams

And a man needs something when he ain't got nothing to hang on to
And there ain't no telling when I'll feel like yelling "I love you!"

Oooh, it gets lonely in the night,
When there ain't no one around
Oooh, she makes me feel all right
Get my feet right off the ground

She's the girl of my dreams

Judy does what I ask her to,
She makes me happy when I feel blue
She stares with the eyes of a child and gets me to my knees
Her heart it never beats in time,
Except when it's beating close to mine
I keep her from my friends, want away with my fantasies.

She's the girl of my dreams 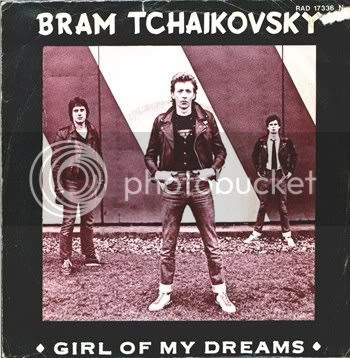 (image: www.rainer-muenz.de)
Pretty much slapped-together by Brushback at 11:01 PM

Great stuff, Brushback! And how well I remember sitting by the radio myself with a rigid digit poised over the 'record' button!

Respect, too, for mentioning not just the Only Ones but Ian Gomm...

I must confess I never twigged to the "blow-up doll" aspect to the lyric. Have you heard Bram as part of the Motors ? They released one sterling 45 in 1977, but the follow-up was excruciating. Stay tuned...

I loved that Ian Gomm song ("Hold On") when I was a kid, though I listened to it again a few days ago and it seems kinda corny now. It's still a good tune, though...

I've only heard one song by the Motors (that I remember), so I'm not sure if it was one of their "good" songs or not.

Yeah, "Hold On" was the song which sprung to my mind too, though he was also involved around the Brinsley Schwarz pub rock scene with Nick Lowe years earlier.

As for the Motors, forget it. I dug out the 45 I was thinking of - their first - but it sucks. The guitar is good, however. "Girl Of My Dreams" is much, much better. It has a nice The Who vibe about it.

I think Ian Gomm co-wrote "Cruel To Be Kind" for Nick Lowe, also. At least I think I remember reading that somewhere.

I don't know if someone's already tried it, but "Girl Of My Dreams" is just dying to be covered right now. Any number of bands could put together a really great version of that song.

"It has a nice The Who vibe about it."

Exactly! It's a "The Kids Are Alright" re-write!

Mission of Burma could do a great version of this song (Clint Conley singing, of course). I mean, why not? They've covered a lot of songs live so far (wish I could have been at the gigs they did Wire's "Dot Dash" and MC5's "Looking At You" - thank god for YouTube).

Smoking Popes could do this; depends if Josh Caterer's Christianity gets in the way considering the subject matter.

Or, just have Consonant do it.

It woulda made a great Moving Targets song-- just listen to half the songs on "Burning In Water"...

Yeh, the Targets were basically the power-pop version of Burma. Not that I'm complaining, of course.

^
Agreed to that. A great power-pop version of Burma.

I agree that "Girl of My Dreams" is one of the best power pop songs ever. I tracked down songwriter Ronnie Thomas in Brighton last year to talk with him about the song. Here's my video interview:
http://www.youtube.com/watch?v=IJYX5XuPfsM