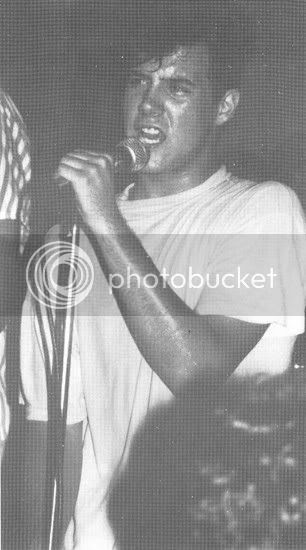 If you remember when I posted the Squirrel Bait "Motorola Cloudburst" 7-inch three weeks ago, I mentioned that the two songs on the record were from an early Squirrel Bait demo from 1984-- a demo that I used to have a copy of, only not anymore. Well, one Pete Burn of the U.K. didn't throw out his copy, which he posted a week ago on his blog, Shitegeist, along with a .pdf of the Squirrel Bait interview that was in the same issue of The Pope that the Motorola Cloudburst 7-inch came with.

To make it easy for you to go to Pete's blog and get the demo, I'll make a break with tradition and actually put up a link-- here's three of them, so you can't miss it:

For the heck of it, I'll also post the b-side to the Motorola Cloudburst 7-inch, which isn't a Squirrel Bait track-- it's a recording that David Grubbs made for a class project while he was at Georgetown. Be sure to stick around for the all-important Rob't Nedelkoff answering machine message at the end. 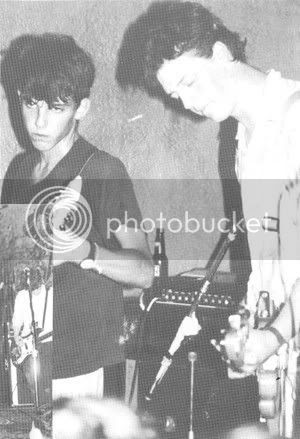 Pretty much slapped-together by Brushback at 10:34 PM

jesus h. christ... they look like they're 12 years old

Maybe that's why they all look really nervous, too. Like, "Geez, fuck, man-- what are we doing?"

Only the "Tense/Earth Shattering" and "Motorola Cloudburst b-side" tracks are my own rips. All the rest are from Shitgeist, but as far as I'm concerned you're only taking what was taken in the first place, so go ahead and share away.

The mp3 files on this post are now listen-only (non-downloadable) files. Sorry chump, but if you'd gotten here sooner instead of reading crap like "I Am Fuel, I Am Friends" all this time, you might've had something.

Luckily, for those of you who missed the boat, I will do my best to respond to any e-mailed requests for the original Motorola Cloudburst files. The '84 demo files, you should still be able to get from Shitgeist (now called Do You Compute?, by the way).

Must have forgotten to comment the first time around. If you love Squirrel Bait you should check this out. Thanks for having these available at some point.