The Worst Record Ever Made 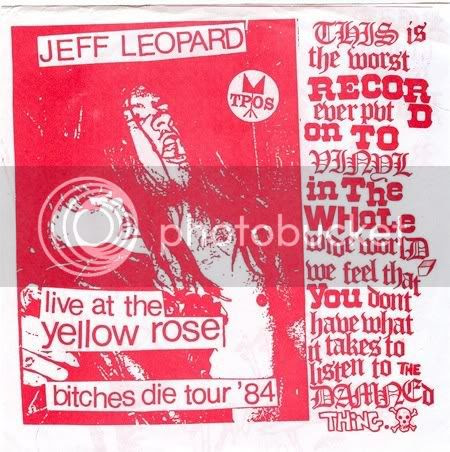 This, the self-proclaimed "Worst Record Ever Put Onto Vinyl", is apparently some Anti-Seen guys goofing around at an open mike night, or so I've heard. You'll either think it's funny as shit, or that it's the worst piece of crap ever. I'm left at a loss for words myself, which has become sort of a problem lately (remember back in the early days of this blog when my posts used to be funny? Yeah, me neither), so I'll let Malcolm Tent-- the star of the upcoming documentary, "I Must Have This Record, Either That Or It's Just A Cold Or Something," and the man responsible for putting Jeff Leopard to vinyl-- to describe it in his own words:

Here, for the first time ever, is the true story of the Jeff Leopard EP. In 1985, Broken Talent undertook its "Barely Alive '85" tour of the Eastern Seaboard. While in Charlotte, NC, we had the pleasure of crashing at the Anti-Seen pad. One day we were hanging around and Jeff Clayton played me the Jeff Leopard tape. Rarely have I experienced such mirth as I experienced when I heard the sheet metal rock anthem "Large Orange". The chorus of "mother... fucker" stuck with me for years. One day about seven years later Jeff mentioned that he still had the tape, and I insisted that I put it out. He was a little bit leery (actually, very leery) but considering that he'd already mastered it for pressing, it was decided that the record MUST come out. Now it's out and I still have to chuckle at "Large Orange".

Only 300 of these records were pressed, although even fewer got out because, as the story goes, after several years the band had the remaining unsold copies destroyed. Anyone who makes it through listening to all 12 minutes of mayhem here should get some kind of medal-- although I did leave one of the "songs" off, to show that I'm not entirely cruel.

There's no track listing for this, so based upon the only two song titles that I could figure out, I made up my own track listing to mark the a-side and b-side. Hey, classy!! 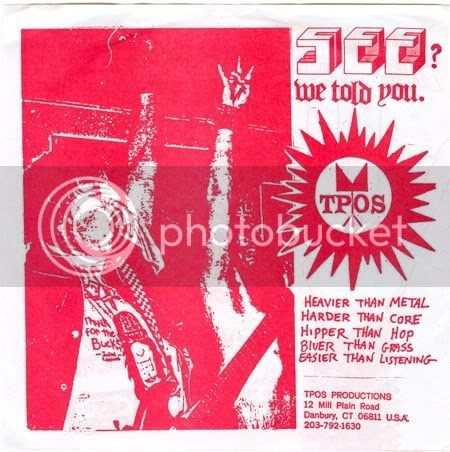 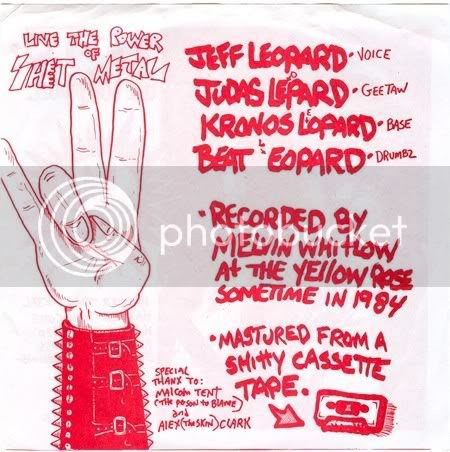 Pretty much slapped-together by Brushback at 6:22 PM

The mp3 files on this post are now listen-only (non-downloadable) files. I almost can't believe that over a dozen people downloaded and listened to these things. Those are some hardy motherfuckers.