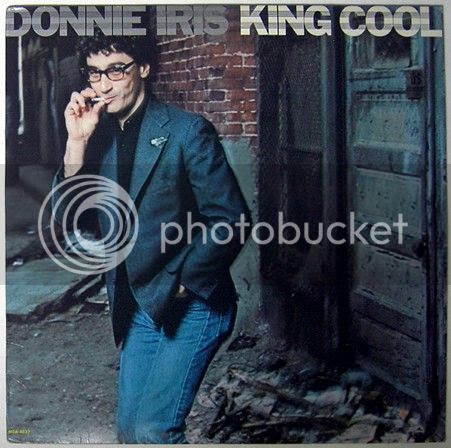 The all-time list of rock solo artists, 1978-1983 (immediate pre-hair metal era) goes like this: 1) Eddie Money 2) Billy Squier 3) Donnie Iris, and I'm not even trying to open this up for debate (knowing that most of you guys don't even care anyway), I'm just throwing it out there. You guys got to turn on the radio when you were 16 and listen to Rage Against The Machine or the "Judgement Night" soundtrack. When I was 16, I got to hear "Ah! Leah!", if I was lucky. Wait, I probably had it better, now that I think about it.

"Ah! Leah!" was Donnie Iris' big hit, of course -- look it up on YouTube if you think you've never heard it, it's great -- but I've always liked "Love is Like a Rock" even more. It was sort of like a Mad Magazine version of a rock song, with an AC/DC type riff plus a lyric that seemed to saying that girls are dumb and you shouldn't listen to adults at all... which is pretty cool stuff when you're 15 years old, I guess. The back of the jacket and the record label credits this album to "Donnie Iris and The Cruisers", but I never heard anyone call it that back then, they just called it Donnie Iris. Even though I'm not fifteen anymore this song still fucken rules, especially for a guy who seemed to be pretty regional as far as his appeal goes (finding anyone outside of the Northeast who's ever heard of Donnie Iris is a bit of a lost cause). 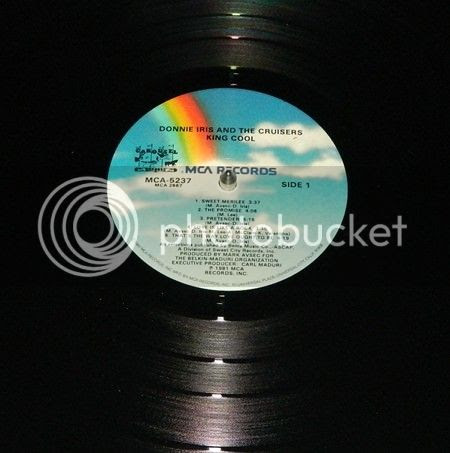 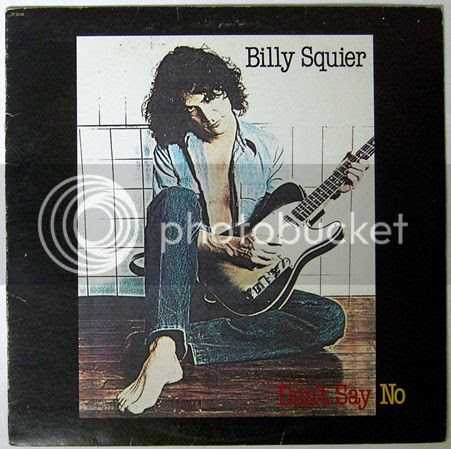 Billy Squier was almost inescapable in '81, with "The Stroke", "Lonely Is The Night", "My Kinda Lover" and all that. "In The Dark", the leadoff track to this album, is definitely the one Billy Squier song that I used to crank the most, since the way the chorus just takes off (followed by the bridge) is massive, and also because it's so fucken weird. For such a commercial AOR type guy, Billy used to cram a lot of odd stuff into his songs: ridiculous overdubbed "gunshot" snare hits, a lot of strangely dull keyboard parts, and some screwy vocal effects. It's as if he was being produced by a committee. There's even a blip during the middle of the guitar solo that almost sounds as if someone put their elbows down on the keyboards by accident. The chattering 'n shit at the end of the guitar solo is pretty great, though. 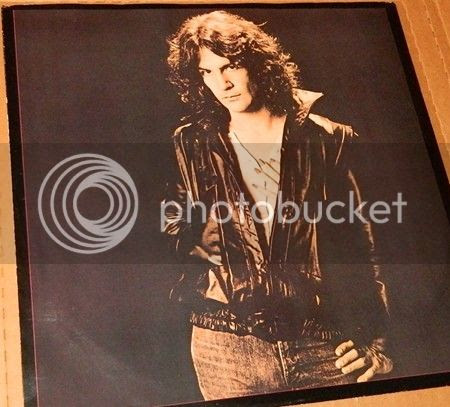 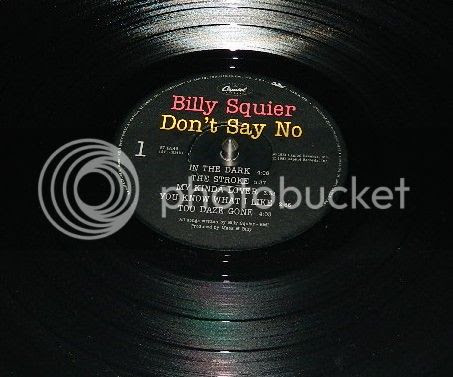 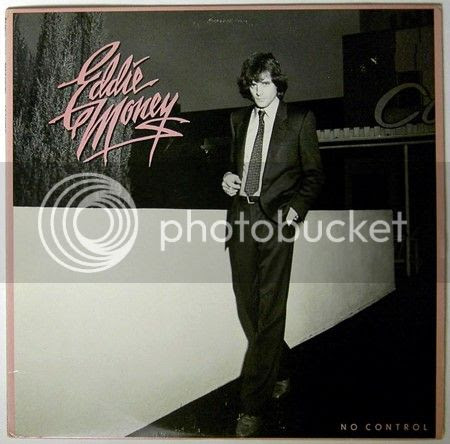 The front jacket photo might look like a set-up for some lame Eagles/Pablo Cruise soft rock shit (almost all of his other album covers are much better, at least the "I just woke up in some chick's apartment and I better find a pay phone fast" ones are), but there's no doubt that Eddie Money was the man, and "Think I'm In Love" is probably my favorite Eddie Money song. I think Sinkhole even covered this song; I wish I still had that record. 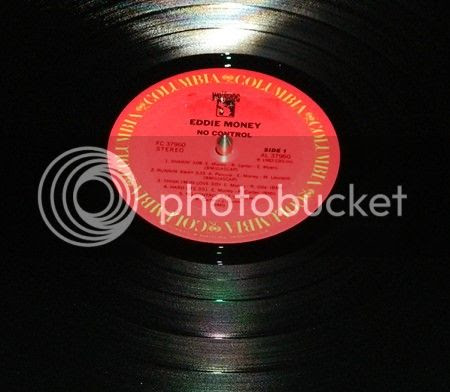 (End notes: When I first posted "Part One" of this series a year ago, "In Case You Didn't Feel Like Showing Up" was just something that I googled (it's the title of a live Ministry DVD or something). I figured that it fit, because everybody would see that I wrote a post about Aerosmith and Cheap Trick and just keep on moving without bothering to read it. Maybe a month or two afterwards, "Beware of The Blog" started using the same title for their live show recaps, which I guess makes more sense. So, apologies to WFMU for stealing their post title before they even started using it.)
Pretty much slapped-together by Brushback at 7:43 PM

I can tell you Donnie Iris made in-roads at least as far south as Washington, D.C. He was pretty inescapable on the radio when I was in 12th grade.

He's from Pennslyvania, so I guess D.C. isn't too far south from that.. I've just always had the feeling that he stayed fairly regional, in a time before every radio station was programmed nationally by some central programming service.

What, no April Wine? (Just kidding - they suck). Believe it or not Donnie Iris made it all the way out to California when I was in high school in 1981 (or at least his music did). I had King Cool and Back on the Streets, the first album that had Ah! Leah on it. Loved those albums, lost them somewhere along the way. And I absolutely wore out my copies of No Control and Don't Say No. Ah, the good old days.

My only fun-fact about Donnie Iris that everyone probably knew already is how he copped a Dolly Parton lyric in Ah Leah. But at least I discovered it organically--I heard this Parton song and she sang "lookin' better than a body has a right to" and I thought "I've heard that before!" Then I had to figure out who stole it from who, as there was no way it could have been a coincidence, and the Internet told me the Parton song came out first and that Donnie did it as a tribute.

Don't forget Triumph and the rest of the "Canadian Invasion"...

I'm trying to remember any Dolly Parton songs. I was going to make an "Eddie and the Cruisers" reference, but that movie came out after "Donnie Iris and The Cruisers" did.

Side note: Donnie Iris has been a "one-hit wonder" not once, but 3 different times (Jaggerz, Wild Cherry, and solo).

I think I wrote something like this the last time you posted something about rock solo artists - Donnie Iris is still played on the classic rock radio station in Pittsburgh every single day, multiple times. According to the morning show hosts he is far and away the most requested artist at the station. He still plays a few shows each year, usually clubs or small theaters that always sell out. The lead single from his last album in 2006 got heavy airplay for a few weeks on that local rock station - very unusual in this day and age of centralized playlists. There's even a MCA Millennium Collection with eleven of his "hits" plus a live version of "The Rapper" which was a national hit for his pre-solo days in The Jaggerz.

I like how Donnie Iris stayed local, still doing endorsements for businesses in Pittsburg and stuff like that.

Is it just me, or does it look like Donny has to pee really bad . . . yet is curiously feeling smug about it? Maybe he's excited at the prospect of peeing in that dirty alley?

Yeah, his posture looks a bit funny... this is a weird photo all around, they airbrushed the garbage on the ground behind Donnie's feet, also.

You'd think a tough-looking alley would be more appropriate for King Cool...

It could be tougher than it looks. Maybe Donny iced a hooker there before the photo was taken. Now, he's watching her, smiling, and thinking, "How ya' likin' Hell, whore?"

Because life is meaningless, I happened upon a list of "hard rock" and/or AOR bands given to shitty rock-writer Chuck Eddy in advance of his book "about" metal. That's how I got to know Mr. Squier, but also Jo Jo Gunne and Diamond Reo and Trooper, the Boyzz and etc...I'm told by some that Squier's "Tale of the Tape" may actually be "the one."

If I could get a book deal I'd write either about AOR of this era or about the tragicomic fates of various bands signed during the Nirvana boom of the early 90s.

[Alright, and I'd write a leaflet about the tragicomic fates of power-pop bands signed during the The Knack boom from whenever that LP dropped. After Dwight Twilley but before 20/20, right? I don't fucking know.]

I think the "Nineties Alt Boom" thing is a subject that's been done to death, although it would be nice for once for someone to take a more skeptical approach to it, rather than the usual "look at this great thing we did, we changed the world!" angle...

As if it's so great that Nirvana (who were a sucky band anyway) led to shit like Third Eye Blind being played non-stop on mainstream radio. Big deal, right?

You're quite right. Not to sound too academic, but it's almost inevitable that the first crop of books on the subject would blow goats and get it wrong. I was thinking more of bands that got signed, some of whom I'm sure we each had personal connections with, who lasted maybe one record or two before their mini-major got sold, or their records simply didn't, and that was that. I know some folks who were crushed by that experience, others who kinda think of it as an absurd passage, and plenty who dodged the bullet for a mixture of idealistic and pragmatic reasons. (I wish I had the issue of MRR, god help me, with Albini's legendary anti-major screed.)

You're right, though. In their own ways Black Flag and AOR each probably "changed the world" more than Nirvana. The industry Flag vaguely fucked with and AOR fed moneybags was much more monolithic and an easier target.

With all apologies (ha ha) to the kids with the Crass patches, world-changing doesn't really go well with punk rock. And corporate rock is far too effective at colonizing "outsiders" and polishing dirty genres into merely "zany," then full-on radio-friendly fare. Early 90s indie rock is my privileged personal moment because it's the one I lived through, but not because I thought Come was going to trumpet the violent overthrow of Wall Street while the Grifters did agrarian land reform. That both bands shirked 1,000 offers from majors is interesting, but inessential, to understanding who they were and what they did. Mostly they just rocked. But maybe that's harder to write about? It would certainly be hard to write about whatever the fuck you'd wanna say Triumph did musically...