I'll Bury What They Leave Behind 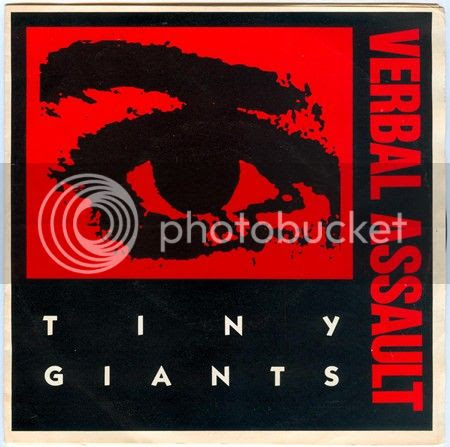 Verbal Assault is a band that hasn't aged well at all with me, dredging up bad memories of "New Wind" 7Seconds, Beefeater-era Dischord releases, and that failed Justice League LP. So, you may ask, why am I bothering to foist this record upon you (instead of that Toddler 7" that I've been sitting on) if I think it's such a crummy platter, anyway? Well, first of all, it's not that crummy-- at least, the guitar sound isn't all bad. Plus Verbal Assault were fairly instrumental to me during my developmental years in hardcore. I ended up seeing them a bunch of times in a bunch of different towns-- Albany, Boston, Providence, Stamford, Norwalk, NYC-- and they were the first band I ever stagedived to (7Seconds/Verbal Assault, 11/29/86), which I thought would be an interesting bit of trivia to pass along except that I realize how stupid it sounds now that I've written it aloud.

Verbal Assault also were the first band to show me that hardcore bands didn't have to listen to just hardcore, a fact that I'd accepted as a given in my Youth Crew-brainwashed mind until the day I rode in Verbal Assault's van in '85 or so, back when all they had was a demo out. It was either on the way to an Anthrax Club show or on the way home from one, but anyway, I found out that what Verbal Assault mostly listened to in their van was reggae and Metallica, which back in those anti-hippie/anti-longhair days nearly bordered on sacrilege (okay, just kidding). The Verbal Assault demo was totally great, by the way, and it wasn't hard for kids like me-- kids who were let down by the slow deterioration of the XClaim! bands while waiting for the eventual Youth Crew explosion a few years later-- to get behind the sentiment of "What The Fuck Do You Do?", or finger-point during "RIX". It was clear, though, that Verbal Assault were interested in being more than just a Youth Crew band, and the last couple of times I saw Chris sing "RIX" he was noticeably going through the motions, and it was obvious that he'd grown tired of the simplistic sentiment.

After "Learn", though, Verbal Assault's records didn't really cut it with me anymore, although I liked them long enough to interview them a couple of times around '86/'87 (interviews for two different zines that never saw the light of day), and also help them get lost on the way to their first Sunday matinee show at CBGB's. I told 'em, "yeah, I know how to get to CB's, follow me", and so they followed my ancient VW Rabbit all the way from Connecticut in their van , only to realize that I'd taken the wrong bridge somewhere along I-87 once we noticed that we were on a dead end street facing LaGuardia Airport.

So, here's the "Tiny Giants" 7-inch-- "More Than Music" blasts out of the speakers pretty good after all these years, so maybe listen to that one first-- along with some Verbal Assault pictures from three of my zines; the top photo is by Sean Reardon, the two middle photos are mine, and the bottom photo is by 'Jenni' (a random photo that I think Al Quint might've sent me). 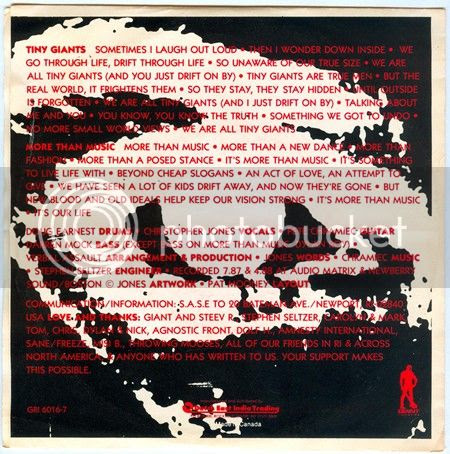 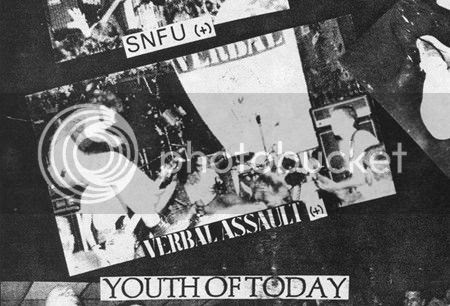 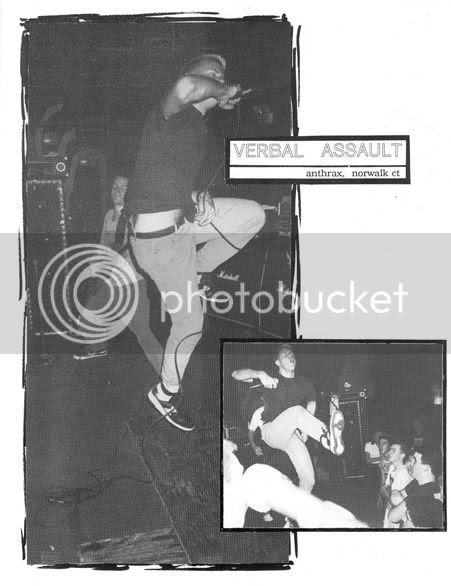 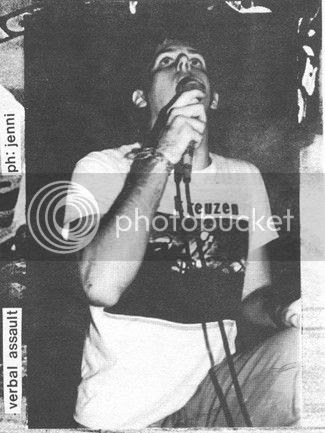 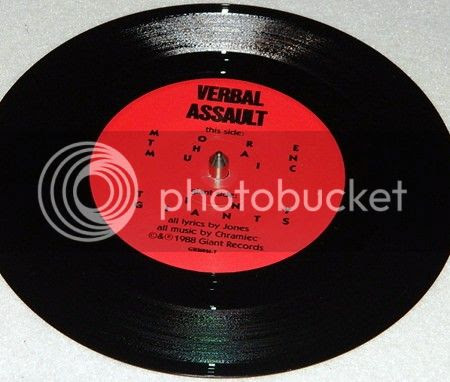 Pretty much slapped-together by Brushback at 8:06 PM

kick ass post man...makes me want to take out the old box of YOur Flesh and MRR Flipside mag's to look for those rad crowd surf high flyin' shots like Verbal Assault do!! Skate moves, with wall rides and plenty O' hand plants. Hit my icon up for a live series by these guys I posted at DU that is a fave. Cheers

Hmmm, live stuff, that might be interesting. Verbal Assault were a pretty good live band.

I'm down with the Tiny Giants 7''. The perfect trifecta: Verbal Assault & Justice League & 7 Seconds 'New Wind' all embody the lost genre of post hardcore/suburban melodic rock. Good call on that!

I inherited a lot of these records from friends who were giving away their old record collections. Most releases from this era of Tiny Giants 7'' all suffered from too much chorus pedal and gated drum kits.

Scream was another Dischord band in the mid/late 80s 'edging' into this territory. And Dag Nasty, they were the crown jewel. Fucking Field Day! Listening to Field Day is almost embarrassing. I can't think of many bands that give me that feeling, so as a glutton for punishment I keep playing it. Back inna day, nobody liked it. Then again my friends and I liked Leeway, so I'm not sure it we had any taste anyhow.

I could take "Can I Say", but Dag Nasty lost me after that.

Scream actually had a half-decent "rock" album, I forget what it was called... "No More Censorship"?

Do you mean the second Scream lp "This Side UP"? I have all three but Dischord is still around so they haven't been ripped/posted yet. I first heard them because I bought their third lp right as it broke so even though it's pure melodic hardcore and now one really liked it after the first two rockers, I dig it the most. Yeah I was privy to buy a skater friends old punk collection when all in jr. high were turning to deadheads which I never laid claim to until later but if I had turned, I could have seen them while alive I suppose. Oh well as my first comment goes, I would rather skank to the beat in a thrash sort of way.

Yep, Scream 'No More Censorship' managed to strip out the hardcore and substitute with some interesting 'The Cult' influence. Alas, not a good record overall.

I knew I was forgetting a band: Uniform Choice - Starring In The Sun. A real bummer.

The best I can figure out is that these bands all had one or two hardcore releases, then they wanted to flex their musical muscles and try better studios with engineers and whatnot. Since it was the middle of the 80s they were damned with the studio trends of the time. Check out the book: http://amzn.to/vY9lsV
which dives deep into recording trends.

Dag Nasty, I can listen to 'Wig Out' and ''Can I Say.' Amazing stuff and I'm stoked I was able to see Dag Nasty in the 80s at the Anthrax. 'Field Day' is not good, but I'm just interested in how they went into such a different creative direction.

On a final note, I'm not trying to slag any of these bands, they all had some great records. And Verbal Assault is a great amazing band! I've enjoyed their records since the 80s.

I ended up seeing Dag Nasty three times, with three different singers I think. At least I got to see them with Dave Smalley.

Once the metal crossover happened and the money started coming around, bands willingly started putting themselves up for sale. You especially saw it in New York, with Rock Hotel and Metal Blade and Combat and so forth-- if you could get the metal kids to buy your LPs, all of a sudden you weren't collecting cans to pay rent anymore... the melodic thing that bands like Uniform Choice and Justice League went through, I think they were just aping the Dischord catalog. You know, first we're going to sound like Minor Threat, then we're going to "evolve" and sound like Embrace and Rights of Spring...

I think it's rad that VA is the first band you stage dived to!!!!!! King Diamond was my first show EVER(I was in 7th grade). These memories are great to have as I sit here 8:40 in the morning listening to VA trial,drinkin coffee from my Grateful Dead glass,John Joseph's Meat is for Pussies book right next to me. Anyways I don't know, stumbled on your blog,looking for Government Issue stuff. Appreciate these stories/can remember a lot of times about who or where I bought certain records from/the downfall of downloading!!!!!! Thanks.