One More Chance To Get It All Wrong 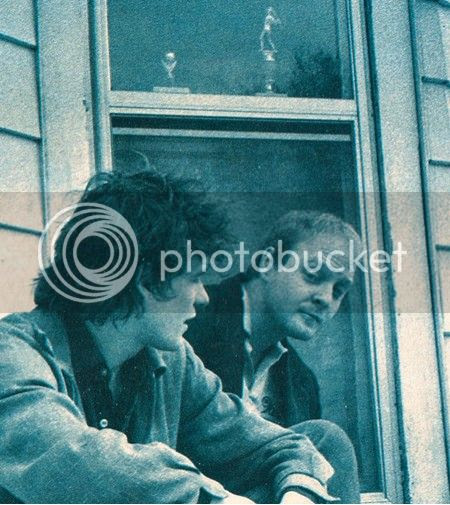 They never told us if the trophies were Bob's or Tommy's...
I thought it was great when The Replacements' Twin/Tone albums got re-issued a couple of years ago, although it was only for nostalgia's sake, as I wasn't all that motivated to run out and buy them right away. Not that I didn't think they'd be worth it, just that I had most of the bonus tracks already, between "All For Nothing" and a bootleg that I'd bought about 8 years ago (bootlegs being the old way to steal music, before mp3 blogs were invented). Besides, my CD tower is still stocked with all of the Twin/Tone albums from the first time they started coming out on CD, on suspect labels like Chameleon and Restless.

After I started buying Replacements records in 1984, I ended up owning vinyl copies of everything up through "Tim" (which I sold almost immediately after I bought it). If there's one thing that all of the CD re-issues are missing, it's the printed inner sleeves that Twin/Tone started using for their LPs at one point, featuring goofy thumbnail descriptions-- possibly written by Peter Jesperson or Blake Gumprecht-- for all 41 of Twin/Tone's releases up 'til then, with each blurb falling at varying degrees between unintentionally comical and beneath stupid. 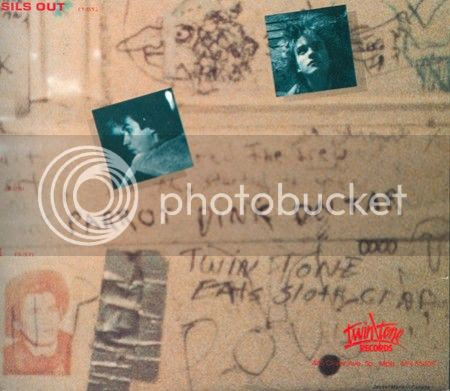 Sometimes while listening to "Let It Be" back then you'd have nothing better to do, so you'd start studying the back cover, vaguely wondering what in-jokes the scrawled "parrot dink on tap" and "Twin/Tone eats slotty crap" might've been referring to. Then you'd look at the tiny 2" x 2" album covers that were printed on one side of the inner sleeve and think to yourself, "Jeez, how come The Replacements have to be on a label with so many uncool bands?", knowing just by looking at albums like Safety Last "Struck By Love" or Curtiss A "Damage Is Done" that there was no way in hell you'd ever want to come close to hearing any of those records in your lifetime. 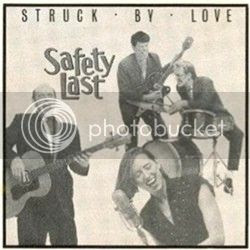 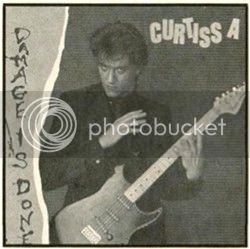 Eventually there'd be nothing left but to read all 41 inner-sleeve blurbs in order. After enough readings, the blurbs would become stuck in your subconscious and phrases like "clenched teeth acid boogie" or "more than a stack of amps can indicate" would start popping into your head at odd times during the day, the way some people are with Monty Python sketches or something. I know I'm not the only one this would happen to, because I'd trade letters with other Replacements fans or read Bill Callahan's Willpower zine, and it was nearly the same way with everyone else. Having a winking knowledge of all the Twin/Tone (or Twin/Toaster, as we'd lovingly call it) inner sleeve blurbs was one of the marks of being a true diehard/idiotic Replacements fan.

Not wanting all you kids who bought the re-issues to miss out on this monumental experience, I've taken my original copy of "Let It Be" (bought in 1984) and scanned most of the inner sleeve blurbs to post here. Now you can listen to your re-issued "Let It Be" the old-fashioned way, or at least snicker at bands like The Phones and The Hypstrz the way I used to (although Bruce says The Hypstrz are okay). 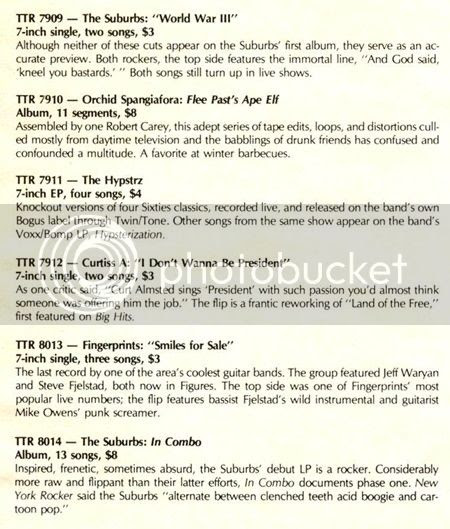 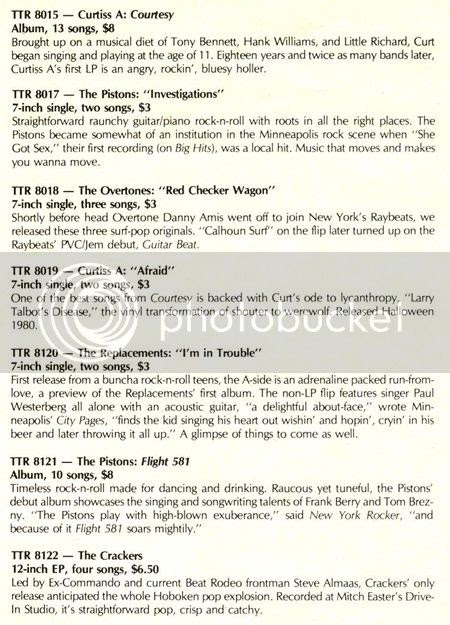 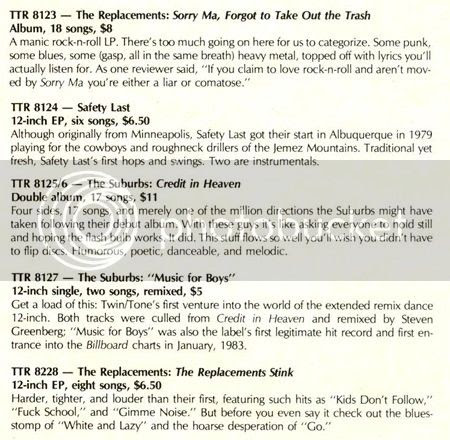 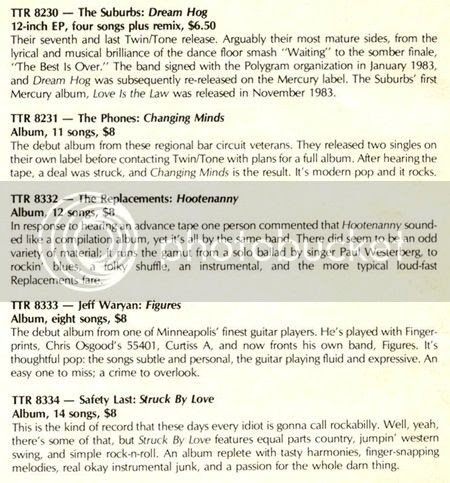 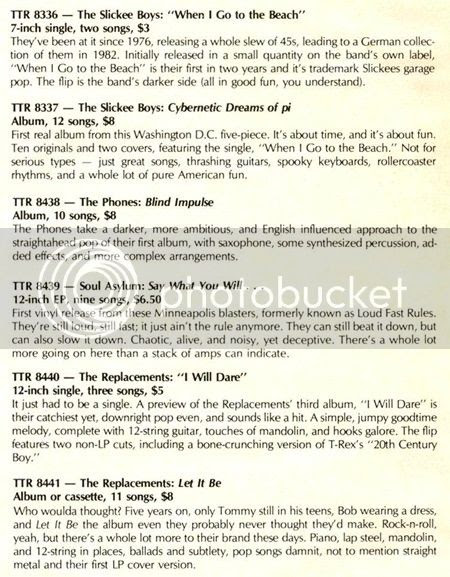 As a bonus, here's a couple of tracks, ripped from beat-up 26-year-old vinyl... 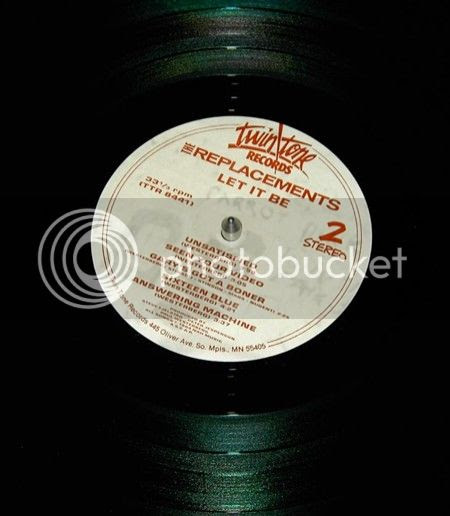 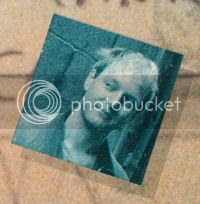 Pretty much slapped-together by Brushback at 8:48 PM

I never heard Curtiss A, but those little descriptions and the pics of his records was enough to frighten all those years ago.

I've got five of the deluxe CD thangs, now; I buy 'em when I find 'em used. If you look at the reviews on Amazon, there are many complaints about how poorly the Twin/Tone ones were done (mastering mistakes and missing outtakes that could've been included). It's interesting to read in the booklet for All Shook Down that I'm not the only one who thinks it's a fantastic album.

So when's the deluxe reissue of The Shit Hits the Fans coming?

Yeah, really-- The Shit Hits The Fans was an official Twin/Tone release, so why no reissue!! *chuckle* Actually, didn't it get pressed to vinyl or CD as a bootleg? I think that's the version I've seen floating around on blogs... I still have my copy of the original tape, plus a professional rip of it on CD-R, but I doubt I'll post it since it's gotten around quite a bit anyway...

I saw all the complaints about the improper edits and poor fade-ins and stuff. I hadn't really noticed it myself on the ones I've listened to, though I'll probably notice it now... I think Peter Jesperson did what he could, knowing that some of the original tapes had been thrown away by the band and some of the rest might've been damaged.

According to the "All Over But The Shouting" book, there was once tons of alternate versions and demos on plain old cassettes, just laying around in boxes and in Paul's old guitar cases...

You're just baiting me by saying All Shook Down is a fantastic album.

I've still got my copy of the original tape, too. Did I ever listen to it a second time? I'm honestly not sure.

Years ago, the story was the 'Mats were pissed at Twin/Tone over royalties or something and threw all the master tapes in the river. That'd explain issues with quality, I suppose.

I'm totally serious; if forced to pick my two favorite albums, it'd be the bookends.

I think "Sorry, Ma" is the Replacements album I'd bring if I were going on a long trip somewhere and could only take one with me.

I used to think that "Hootenanny" was a better album than "Sorry, Ma", but now in the past few years I've changed my mind to where I'm not as sure.

My favorite Replacements record of all time might be "Stink", just for the way it sounds and because I think it's a flawless block of songs (there's not really one song on there that I skip over), but it's only an EP plus it only seems to fit one mood when you listen to it.

I believe Orchid Spangiafora is the most collectible record on the list because of Byron Coley's almost involvement.

I never knew about the Byron Coley thing (turns out he contributed a couple of sound bites), but then, I never would've paid attention to anything Byron Coley did musically. I barely even liked him as a writer.

I was not pleased when Byron & Jimmy shut Forced Exposure, the magazine, down and started the on-line store.

I'd just resubcribed to get the whatever the last issue was, so I could get the accompanying 7". So, I got one issue for the price of four. No refund. No offer even of credit at the on-line store (I asked, to no avail). I highly doubt I was the only person who got screwed thusly.

Wow, they closed up shop and kept people's checks in their pockets? That's pretty lame, seeing as they continue to be in business to this day... and especially since store credit wouldn't have cost them as much out-of-pocket as sending everyone's cash back.

The Hypsterz are one of the many incarnations of The Batson Brothers (Ernie and Bill)during their three decades of playing the Twin Cities...others include King Kustom, and The Mighty Mofos.
having seen them numerous times, as friend and fan...I can assure you, they SMOKE.
In fact, remember last year when I mentioned seeing most of MAN SIZED ACTION at a Minneapolis gig? Hypsterz. So be like them and me.

There. I retracted my brash and erroneous mis-statement. I will instead chuckle at The Suburbs (who Rev. Norb actually liked, and I even owned "Love Is The Law" once).

My half-assed snickering knows no bounds.

Did I ever tell you about the time Norb and I went to a gay bar?

I think you mentioned that to me at a Field Recordings show once. It was his idea, right?

This was a fun read. I remember an issue of Willpower that had a cartoon of a horse with a guitar to illustrate "the hoarse desperation of 'Go'" from those Twin/Tone liner notes. And then there was the guy in the sombrero who was labelled "Senor Video"! I still love In Combo (and about half of Credit in Heaven).

Yeah, Señor Video, that cracked me up. Then there was "Sorry, Paul, Forgot To Wash Your Plaid Shirt"... Bill used to put stupid Paul lyrics as captions/word balloons on his photos, like "friends what never ache" and "fanzines are cheap I know"... then there was that time Bill got tired of people putting "can't hardly wait!" at the bottom of the page whenever they sent him a letter, so he told everyone to stop it, that he was sick of it... I wish I still had those old Willpower zines. I had stuff in two or three of them, and Bill used to send me crap for my zine, too.

And by the way, Bob supposedly won a trophy for softball, so I'm gonna guess that the tropies in the window are his.

that's one of the funniest posts i've read in a while. took me back to '85

Curtiss A website has an mp3 of his "underground hit" Land of the Free.
http://www.curtissa.com/music/Big_Hits_Of_Mid-America_-_Volume_Three/03_Land_Of_The_Free.mp3