I've Been Painting Crosses On Your Garden Gate 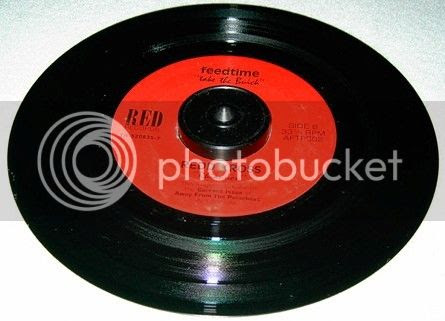 Away From The Pulsebeat was a shitty fanzine out of New Jersey back in the late '80s, pretty much in the same category as Chemical Imbalance in that they included a 7" with each issue and generally followed along with whatever Forced Exposure and Conflict were doing in their reviews section. AFTPB's "thing", apparently discovered mid-stream, was that every record from Australia was great, much like that other '80s zine from Ohio, the one that gave everything on 4AD a great review, although you can't remember the name of it because it sucked anyway.

My copy of AFTPB #2 is long gone (*wait, I found my copy-- it still totally blows), but I've still got the 7" that came with it. Though most of the artists on the 7" are pretty swank, the material doesn't quite live up to prospects (the Redd Kross cover of Fleetwood Mac's "Rhiannon" is downright laughable). Still, I don't think the Feedtime track is available anywhere else, and the Nikki Sudden track hits a nice little uptick at around the two minute mark. This record's been flopping around in a box without a plastic bag or picture sleeve for 20-plus years now, just like when I first bought it, so be aware that it can be a bit crackly in parts. 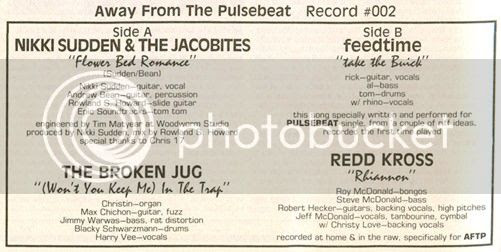 Pretty much slapped-together by Brushback at 7:23 PM

Oh now, I am quite fond of RK's version of Rhiannon. If anyone's interested I have a REALLY crappy copy that I can upload :-)

Somebody likes that thing? I dunno, I've tried listening to it twice and each time I ended up whipping the needle off the record before even a minute was over...

I guess, then, I'll never have your superstar lovedoll child ! ;-)

I re-sent an e-mail, hopefully I haven't been using the wrong address all along...

If this is leading to a post on both LOVE DOLLS SUPERSTAR comps...van you post the Nip Driver's version of "Fox on the Run"?
it's the ONLY thing I miss about lending them both to someone and never getting them back.

I don't have either of the Lovedolls soundtracks! I do have the Nip Drivers' "Fox on the Run", though...

Nip Drivers, "Fox On the Run"

Hey, Bruce, where were ya Saturday night??

Nip Drivers do indeed rule!
And they did so many great covers ... Have You Never Been Mellow is a personal fave. Thanks for upping Fox on the Run, I think that's the only thing I didn't have on ye olde computer.

Yeah, "Have You Never Been Mellow?", "Rio"... a better band than most people are aware of.

mad love for the NIP DRIVERS, we used to cover "Elephant Man" in the New Reagans. thanks!
Saturday I laid low, though I did creep past larry's near closing time on my way to the Taco truck.

I left around 1:00, didn't see the taco truck though. I had an urge to drop in on the Kennedys Fried Chicken across the street at one point, but then thought better of it.

Great ! thnx for posting I have this 7 Inch. FEEDTIME are GOD! NIKKI SUDDEN overrated after SWELL MAPS...

Nikki Sudden is like the Alex Chilton of post-punk, spotty-solo-output wise.