That's The God Of Everything 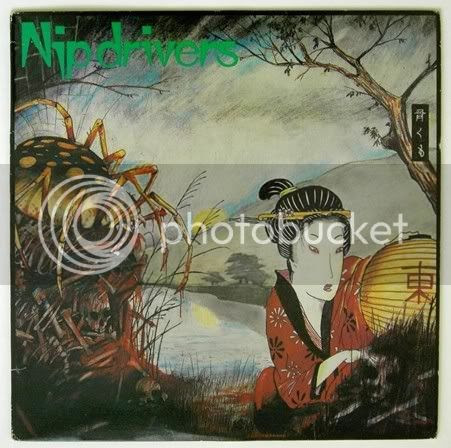 I've said before that the Nip Drivers are friggin' great, if you'll remember, and "Oh Blessed Freak Show" is one of the greatest hardcore LPs of all time. Not quite up there with "Tied Down" and "Get It Away", necessarily, but not as far back as you were thinking, either. Hard to believe that this came out on Enigma, the worst record label ever (or would be, had Limited Potential never existed).

Really, what could be better than a cover of "Have You Never Been Mellow?" (listed on both the sleeve and the label as "Have You Ever Been Mellow", so that's what I'm sticking with here), other than a 40-second version of Duran Duran's "Rio" that nicks the opening riff from "Nervous Breakdown", of course. Between Mike Webber's madness and Kurt Schellenbach's guitars, there's some sort of insanity jumping out of the grooves on almost every track here. Although I ripped 12 tracks I'm only gonna post eight, so let me know if I've left off one of your favorites-- you never know, you might get lucky. 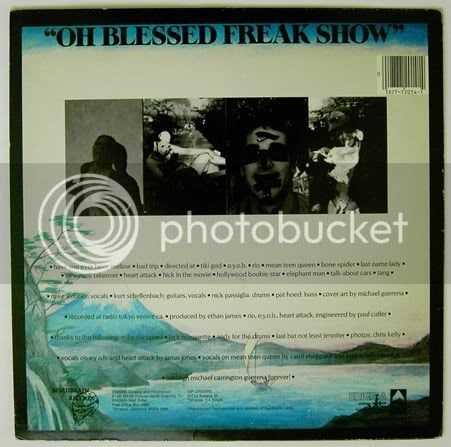 "Have You Ever Been Mellow"

"Hick In The Movie" 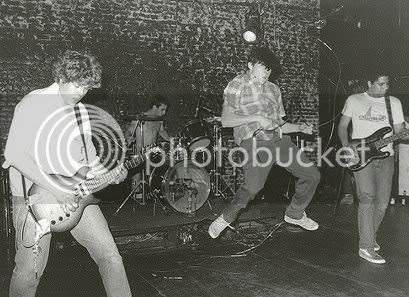 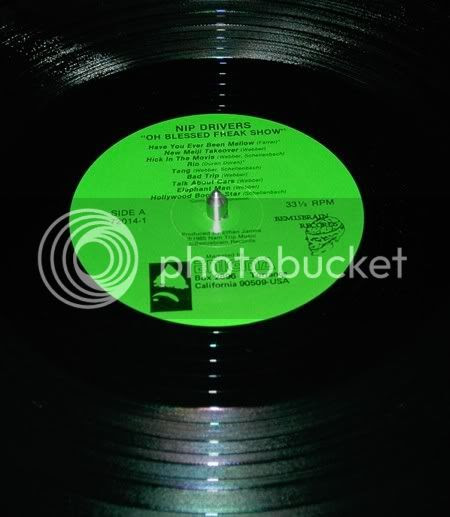 Pretty much slapped-together by Brushback at 10:46 PM

in the ensuing 23 years, there's probably only been a few weeks where I haven't sung "hick in the movie" at some point.
thanks for ruining my secret game!

"Hick in the movie that saw the flying saucerrrrrrrr..."

this album killed & has continued to kill for all of these years... i think i picked it up in 86/87 in the cut-out bin @ vintage vinyl.

do you have the poster?

Might've had the poster back then, but not any more. I think I saw that Taang! has them for sale, though.

Oh, yeah, there's definitely songs on this record that are great for mix tapes.

Love' em. Saw them live a couple of times. I will never forget the timid femle asian bass player into the set 2 or 3 songs, she puts her bass into the case and leaves. Bnad doesnt even miss a beat.

The mp3 files on this post are now listen-only (non-downloadable) files. They are now being hosted on my Vox page (accessible through any of the listen-only links above), along with four other songs that weren't included in the original post - "Bad Trip", "Directed At", "Last Name Lady" (which shreds), and "Mean Teen Queen" (I rule the scene!).

For those of you who missed the boat, I will do my best to respond to any e-mailed requests for the original files-- maybe only a handful of 'em, though, because all 12 of them would make for a cumbersome attachment.

so nice to see people making money off of my artwork..

Um, wouldn't that have been between you and the band originally, back in 1985?

Because I'm certainly not making any money here by posting a photo I took of one of the records in my collection...

talking about Tang selling my poster..not you numbnuts..

Ha, okay. Yeah, Taang! is selling the poster on their web site for 6 bucks... kinda shitty that the original artist isn't getting paid, but then I'll bet that no one from the band passed that info along when Taang! re-issued the Nip Drivers stuff...

apparently Mike sold all the rights to them before he died..he neglected to tell anyone..

hey Kurt-
How do you feel about that?

Great Band! I was lucky enough to see 'em a couple of times before Mike W. checked out for good.
...you guys mean Curtis from Taang actually RIPS OFF ARTISTS???? Say it ain't so!!!!! ;)