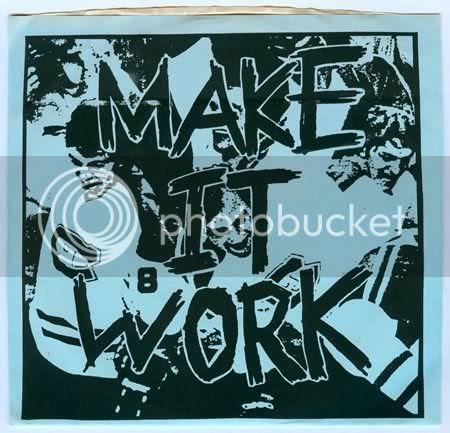 I guess I gotta get around to posting my own records eventually, meaning the ones I released (all three of them), so here's my singular contribution to 80's Connecticut hardcore-- the "Make It Work" compilation. At the time it wasn't much more than an EP of local bands that I gave away for free with the third issue of Run It, only now it's listed in Wikipedia as the first vinyl appearance of Youth of Today, since it beat out the release of their "Can't Close My Eyes" EP on Positive Force by about a month.

Run It might've also been the first fanzine to come with an actual vinyl record and not a flexi, though it's not something that I've ever verified. I was planning to release a flexi originally, but then Jim Spadaccini of the Vatican Commandos convinced me that a 7" would me more worthwhile. The bands had sent their songs to me, taken from demos or practice tapes or what have you, along with a million other songs which were all on ordinary cassette tapes I carried around in my backpack, and that's what I gave Jim to use to make the record.

For years I told a neat story about how singer Chuck Wheat's name really was Charles Wheat, since that's how his dad answered the phone when I called to get the lyrics for the lyric sheet, but then Chuck Wheat himself sent me a comment last year disavowing that story, so now I'm not sure what I remember.

The Youth of Today songs here are two extra songs that were recorded for "Can't Close My Eyes" but didn't make the record, although Positive Force released "Take a Stand" on the "Another Shot For Bracken" compilation (yeah, that's not one that I've ever owned, either). Of course, Revelation's full-length reissue has all the songs on it. Youth of Today were awesome back then; the Youth Crew clone bands were still a couple of years away from developing, so Youth of Today were like a force all to themselves at that point, and there was no other band in CT who could match their ferocity. Crippled Youth, from nearby New York, were about the only other band in the area who were doing somthing similar (until we heard Straight Ahead on the "End The War Zone" comp), and Ray kept pushing me to put Crippled Youth on the compilation also, but I wanted it to remain all Connecticut bands instead. I can only imagine what sort of collectible that would've been.

Ray and Porcell always got a kick out of stirring up shit, so as Violent Children were breaking up and Youth of Today were just getting started, there was a bunch of stuff going around the CT scene about which bands were "soft" and which bands were "hard", which a lot of the old guard in the scene (Seizure, 76% Uncertain, Contraband-- the so-called "soft" bands) didn't think was too funny. Chronic Disorder were more no guard than old guard, being from the boonies north of Hartford, but they were the ones who were first to write a song about it.

It started with something I said in an interview with Jason ("Spit Respectable") of Chronic Disorder. After we spent a while ripping everyone else in the scene up and down in the interview, Jason finally said, "Wait, why are we cutting on other people when I don't give a shit?" and I said, "Because everyone cuts on you." Jason was like, "What do they say?" and I said, "Nobody moshes to Chronic Disorder." Jason had a sense of humor about himself, at least, so when it came time for him to send me a tape of songs for "Make It Work", as a joke he put a song on it that he had written called "Unmoshable Chronic Disorder". I don't think he thought I'd actually use it on the record, but I did.

The other song Jason sent me was a studio version of "Welcome to The Modern World" that he had recorded mostly by himself, including playing the drums, which I thought was pretty bad. There was a louder, faster version of "Welcome to The Modern World" on a rough practice tape that Chronic Disorder had made which had a lot more balls to it, so I told Jason that I wanted to use that one instead. Jason went along with it, though he wasn't all that sure about it; he thought the practice version was inferior, but I thought it captured something.

After the record came out, Jason would sometimes good-naturedly grumble about how I had released a song of theirs that was "recorded in a garage somewhere." On the "Mutiny on The Bowery" compilation (recorded live at CBGB's in '86), Jason introduces "Welcome to The Modern World" by first playing the opening verse to "Unmoshable", and then saying, "This is the other song, called 'Welcome to The Modern World'-- the one that sounds like shit in front of it.. yeah, that one," which I think is a joking reference to "Make It Work". ("Mutiny on The Bowery" was posted on "Something I Learned Today", so you can still find it there and listen to it if you want.)

Seizure's song, the Flipper-ish "Mary Lou" (recorded live at CBGB's), is a song that a bunch of people told me had to be on the record because it cracked them up so much. Karl, who was the singer for Seizure at the time, later joined Corrosion of Conformity, but it's Sex Bomb who does most of the singing on this one. Seizure had a bunch of goofy songs back then, like "Jackie" ("Jackie on the corner got V.D./Jackie on the corner she gave it to me"), "Mary Lou", and "Guns For Everyone", so most people didn't take them too seriously. Then when their first record came out a year later, called "All Hail The Fucking System", a lot of people were surprised because it was a totally great record, and a really heavy political record too.

I don't remember how many copies of "Make It Work" were pressed; probably 300 at most, which I had made in two batches because I didn't have the money to pay for them all at once (hence the "second pressing" notation on some of them, which is a bit of a misnomer). About 200 of them came inside the zine, without a sleeve (just a little quarter-page lyric sheet), and then maybe another 100 or so had an elaborate fold-out sleeve that I had printed up. I didn't like the way the fold-out sleeve came out, so when I had less than 30 copies left, I switched to the photocopied picture sleeve that you see here; some were on gray paper, while others (like the one here) were on blue. Out of this version, maybe 15 of them came with the lyric sheet you see down below.

I was amused to see a gray-sleeved copy (with the original first-run lyric sheet) listed on eBay for $175 a few months ago, though I don't think it sold. 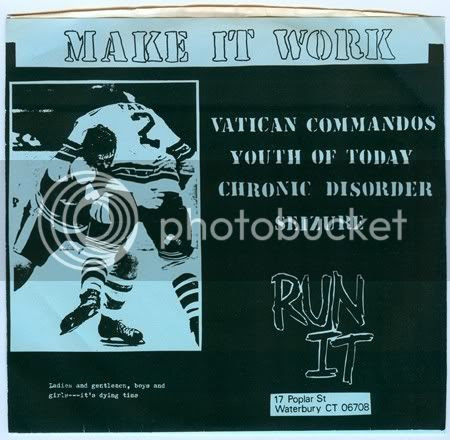 "Your World is Flat"

"Welcome to The Modern World" 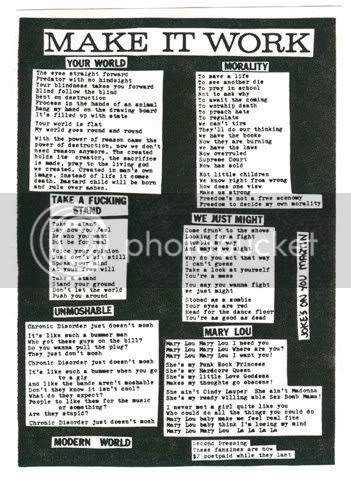 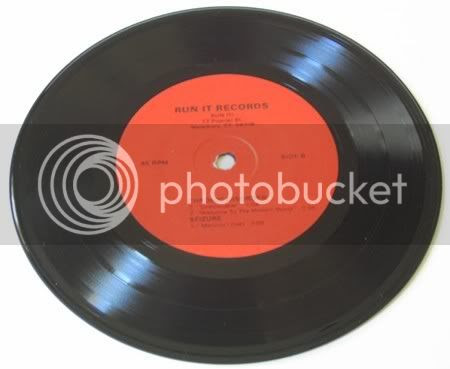 Here are some photos and other crap from Run It #3, the issue that the record came with: 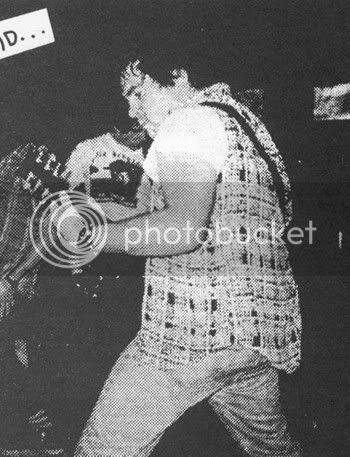 These three Youth of Today photos (from Run It #3) are from two different shows in 1985 at the original Anthrax Club in Stamford. The first one I took, and the other two were taken by Jordan Cooper of Revelation Records (only Revelation didn't exist yet). In the one I took, you can see Matt from Crippled Youth in the background wearing a Uniform Choice shirt, and standing next to him is Scott Munroe. The show was literally Crippled Youth's second or third show ever, with Matt playing guitar and singing. 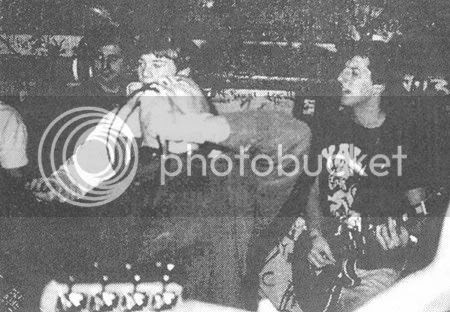 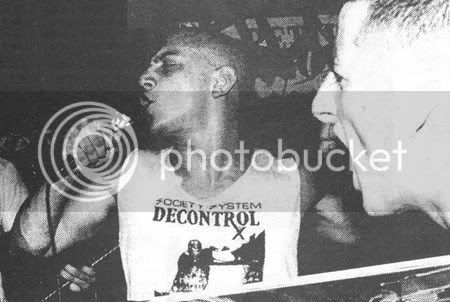 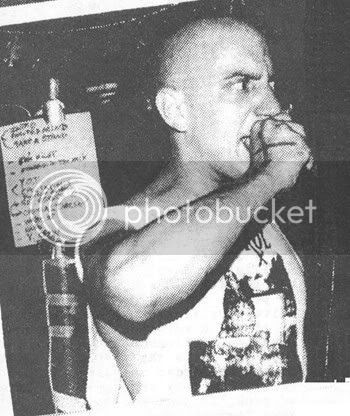 Pretty much slapped-together by Brushback at 4:53 PM

To add my own tiny historical perspective, "Mutiny On The Bowery" was sequenced by Mykel Board, Donny The Punk, and I in two marathon sessions in Mykel's apartment on Bleecker Street, where we listened to cassette tapes of full sets from seven bands (it was hours and hours of music) until we finally settled on the record as it was released.

Spit Respectable (Jason) of Chronic Disorder wanted us to include a cover of "Steppin' Stone" from his band, but the three of us agreed very quickly that the world did not need the 1345th hardcore cover of that particular song.

I had about a dozen sealed copies of Mutiny on the Bowery in my basement up until I moved; they might be in a box somewhere or I might have just thrown them out. I tried selling them on eBay over th years and couldn't get $5 for them most of the time, which is what we sold them for back in 1986. I gave a bunch to Dave Scott (the drummer of AOD, who's the biggest "name" band on the record) but I have no idea if he sold his either.

Come on, Jim-- you can't fool me into believing that Mykel Board was involved with a record that didn't sell.

Fantastic post -- love this stuff. "Make it Work" was one of those mysterious records I knew only from references on record trade lists when I was a youth.

It seems a lot cooler to me now. For a while, I didn't think it was much of a record.

I have that old tape: Freedom From Censorship.. It has APPLE, Seizure, etc.. TPOS #25
ANYONE WHO CAN READ THIS:

I AM ATTEMPTING A BIG PROJECT OF
A WRITTEN HISTORY OF CONNECTICUT
PUNK ROCK!! IT WILL BE A ZINE AND HOPEFULLY A BOOK...

If anyone wants to be a part of it, write something, tell a story, share some photos, flyers etc. Please get in touch with me.