We Are The One

This is a split 7" that came free with Norm Arenas’ Anti- 'zine, a couple of issues after he changed the name from Anti-Matter. The Shades Apart song on this, a rippin' cover of the Avengers' "We Are The One", is so shit-hot that I must've played it about 50 times the first two weeks I had this record. Seriously, check this one out.

There's an awful cover of Minor Threat's "Out of Step" on the flip, with Ressurection making it sound like a crappy GBH song instead. I read an interview with them once where they said they intentionally mis-spelled their name, for whatever reason they didn't exactly say, and the whole thing is just so stupid that I'm not even gonna bother with them. 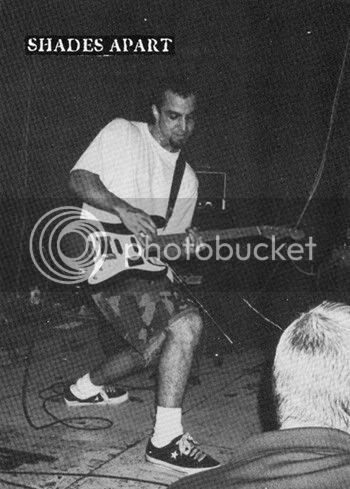 Pretty much slapped-together by Brushback at 9:17 PM

The story that I was told about the misspelling of Ressurection: that they didn't want to blaspheme and draw parallels between themselves and a religious resurrection, or somesuch.

But yes, they sucked, so it doesn't really matter. The Shades Apart song is indeed great.

Cripes, you'd think that Ressurection would've just went with a different name, then-- like "Rebirth" or something-- and been done with it.

Greg, it sorta figures that you'd have the inside info on a crappy hardcore band... *ducks and hides*

I offer no guarantees on the veracity of the story -- remember that I lived in Arizona, at a time when getting hardcore band news was like one long game of telephone. But that was what we heard.

I'd like to be able to refute the "inside info" crack, but, yeah, I don't have much defense there. Maybe someday I'll do a "crappiest band I ever worshipped" post...

I think we're still waiting for the "crappiest band I ever worshipped" post!

Hey, sorry, but the mp3 file on this post is now listen-only (non-downloadable) files. You can still check out what it sounds like, at least, and for those of you who came to the party late I will do my best to respond to any e-mailed requests for the original files.