Make Sure You Take It The Wrong Way 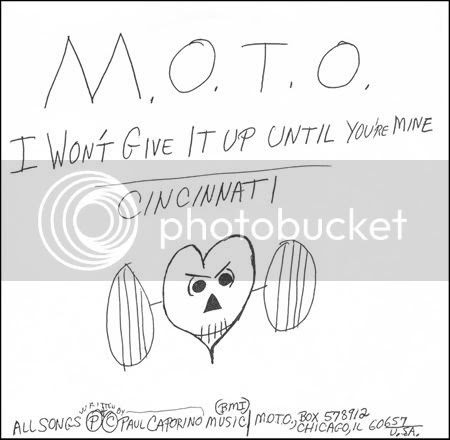 After a little bit of thinking about who should get the lead-off position as the first record posted on this site, I figured I might as well give the honor to the man I stole the blog's title from-- Paul Caporino (aka M.O.T.O.).

Now, M.O.T.O.'s "Ampeg Stud" cassette is practically the best collection of home-recorded songs ever, if not the pinnacle of recorded music for all time (I swear!). This 7" collects two songs from that tape and presses them onto measly-looking gold-colored vinyl: "I Won't Give It Up Until You're Mine", which sounds like Rainbow covering the Seeds' "Can't Seem To Make You Mine", and the heartstring-ripping "Cincinnati", which is gut-wrenching enough to have you crying by the end of it, except that people who dig M.O.T.O. are all very manly and wouldn't even think of doing something as stupid as crying over a freakin' record. I'll bet you could do it, though.

The Ham Steak side sounds like Gordon Lightfoot on the Dr. Demento Show and is one of the worst things I've ever heard, so I'm not going to even bother including it here. 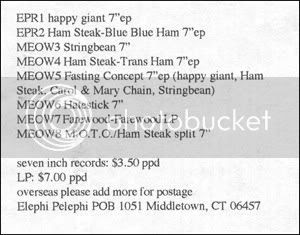 Before anyone thinks (based on these two songs) that I make the worst vinyl rips ever, let me just say that the doubled-down aesthetics that make this sound like it was recorded through a pillow, as well as the TV you can hear playing in the background, is Paul's fault. The crappy edit that starts off "Cincinnati" is the guy who mastered the tape's fault. Everything else is my fault, I guess. 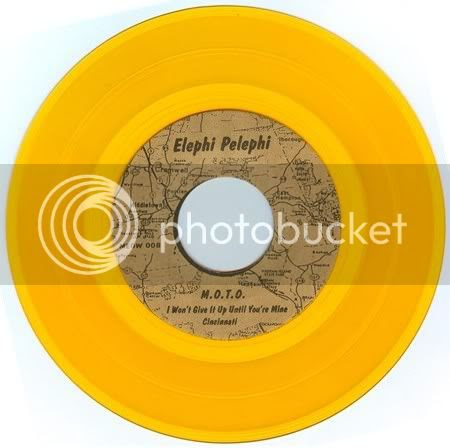 "I Won't Give It Up Until You're Mine"

(these files are now listen-only)
Pretty much slapped-together by Brushback at 9:49 PM

Yeah...M.O.T.O. plays here occasionally in Saint Louis...they have some local connections. Paul's apparently a Teezar fan too which just makes my day.

Yeah, M.O.T.O. rules. Paul likes cheesy music as much as anyone, I guess.

Also, sorry, but the mp3 files on this post are now listen-only (non-downloadable) files. They were both pretty crackly anyway. For those of you who came to the party late, I will do my best to respond to any e-mailed requests for the original files.