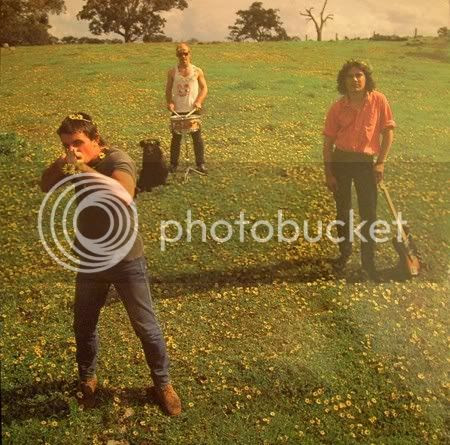 Around the same time that a newer, less-constricted underground scene-- exemplefied by labels like Homestead Records and zines like the then-newly revitalized Forced Exposure-- began sprouting up from what was left of the first waves of U.S. hardcore in the mid-80's, a bunch of people started to realize that just about every piece of punk rock vinyl that made its way to American record shops from Australia or New Zealand was absolute gold. For a while there you could pretty much count on anything from Citadel or Flying Nun or Aberrant or Waterfront, etc. etc., was gonna be great, and so I'd take regular trips down to the old Rhymes Records in New Haven, which had a good OZ/NZ section, and try to grab whatever I could get my hands on. The day that I walked out of Rhymes with a Greenhouse of Terror 12" and the Cosmic Psychos' "Down On The Farm", both scored from the used bin for less than five bucks each, was an awesome day indeed.

Like a lot of Aussie bands, the Cosmic Psychos definitely take their cues from the Stooges' stretched-out, wah-wah pedal-infused jams, but in that bass-heavy, lyrically-direct way that the Australians have a knack for. If you haven't heard this stuff before, though, don't be misled into thinking this is some lame-ass drugged-out hippie shit (I mean, fuck, that's what always pops into my head whenever I think back to my old Stooges records). This stuff has definitely got some big balls, and seeing how "Down On The Farm" came out in '85, it's pretty easy to draw a direct line from this to Halo of Flies-- especially since Amp Rep re-issued this on CD a while back, or so I've heard.

Just listen to the crushing riff on "Custom Credit", and the way Ross Knight sings, "You drove me up the wall, I ain't no spidah" before bringing in the guitar solo by announcing, "Give us some wah-wah, Dirty," and then tell me this shit ain't great.

"Down On The Farm" 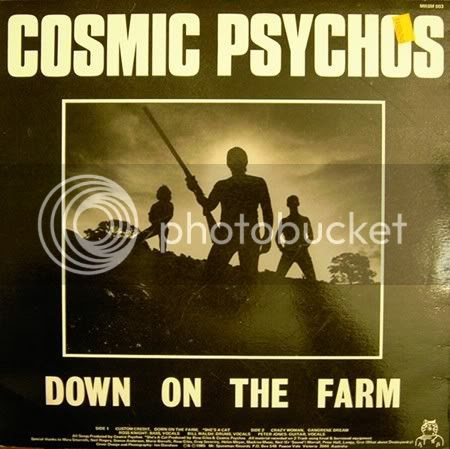 Pretty much slapped-together by Brushback at 6:15 PM

The first time I saw/heard the Cosmic Psychos was on the DOPE, GUNS VHS. I assumed, at first, that they had hired out ACTORS to play the band (especially the Mad Max-ian bass singer mullet dude). As the video played on, I kinda said to myself "Oh... I guess... This IS the band... whoa..."

They look like the type guys who would fuck your mother.

I always considered Cosmic Psychos a cross between the Stooges' best moments and Motorhead's best moment (yes, singular tense). It's obvious lead growler/bassist Ross (Motorhead rip right there) is a graduate from The Lemmy Kilmeister School of Singing.

Too bad you didn't post "Gangrene Dream," the instrumental number that closes this whopper of a debut. Always loved this band but their daker side was definitely on the front-end introductory side of their career with the funny-ha-ha phase of their deal kicking in with GO THE HACK and on forward.

It should be pointed out that 'Custom Credit' was the name of a unlicensed finance company in Australia during the 1970-80s that offered consumer credit loans at rather high exorbitant interest rates. Therefore the song is about avoiding a Debt Collector, and lamenting on the poor decision for taking out a Custom Credit loan.

Also, taking a 'South Bound Tram' is also a rather amusing reference to taking Public Transportation as the tram (cable car) routes to South of Melbourne didn't really take you that far.