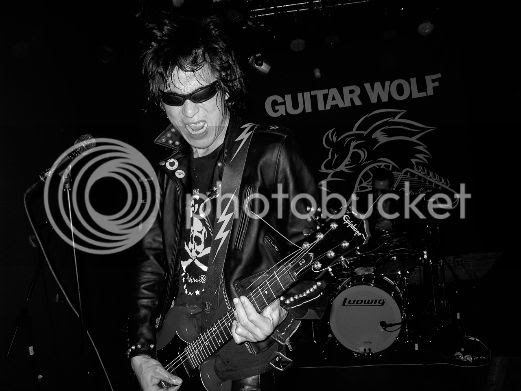 My way around Milford is for shit-- I mean, I've been there a bunch of times before so I should know my way by now, but the town's just so fucked up-- so I left extra early on Saturday, figuring that I was bound to get lost on my way to the show. I actually didn't get lost (well, not really), but it's a good thing that I got to the club early anyway, because Estrogen Highs were made to go on at 9:00, even though there was only Cheap Time playing between them and the headliners Guitar Wolf, and Guitar Wolf didn't actually hit the stage until a quarter to midnight. I don't know if that had anything to do with Estrogen Highs playing more subdued, but they seemed to be reigning in their instincts a bit, like not freaking out during songs as much. It was almost like one of those "sober Replacements" shows that I keep hearing about. They were still really good, though-- "The Supposing View" has become a cracking good song live, even beyond what it is on the record-- plus they had copies of their brand-new 7" on Southpaw, which is four songs that were supposed to be on the "Sods and Odds" tape on Herp-a-Derp but I guess the guy fell down or something.

Cheap Time's 20-minute set was pretty decent, too, although the 40-minute set they played right after it wasn't (they played too fucking long, that's the joke there, son). I kinda had enough of Cheap Time a couple years ago and wasn't expecting much from them this time around-- which in these modern times means I was texting people things like "I think this next band is going to suck an egg" before they went on-- but they were actually just as rippin' "punk" as when I saw them in the Whitney House basement back in 2008. I was also pretty stoked to see that they had copies of the Scion split with Bad Sports with them, since the Bad Sports song was one of my favorite songs from all of last year. They also made their own hand-stamped-looking alternate sleeve to go with it, too, possibly to offset the fact that they're charging people 6 bucks for a single that they no doubt got by the boxload from Scion for free. At least it keeps the Scion logo out of your face every time you pull the record out (although the label still has "Scion is a marque of Toyota Motor Sales and Scion and the Scion logo are trademarks of the Toyota Motor Company" written all over it), which will go towards helping you forget that you actually own a punk record made by an auto company whose cars all look like a box of farts.

After seeing Guitar Wolf for the first time, I think all bands should do every single one of these: A) Have a ridiculously dinky fog machine that makes a ridiculously dinky amount of fog B) Stand in one spot and give everyone the devil's horns for about a minute before playing anything C) Slug down a can of beer in one chug and throw the can out into the crowd D) have "ROCK AND ROLL" spelled out on the band of your underwear (okay, maybe it was a belt, what difference does it make) E) Put tape on the back of your guitar neck so that you can remember all five of the chords that make up your set list F) Rock the fuck out, regardless. How much fun would that be? For about a week, at least. 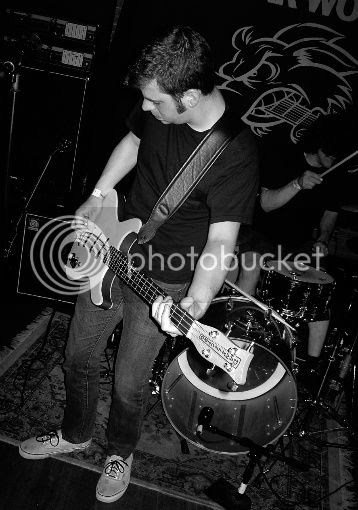 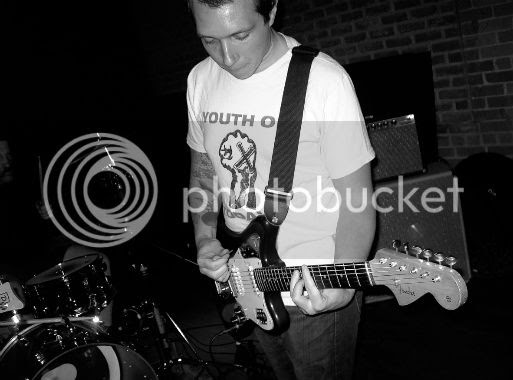 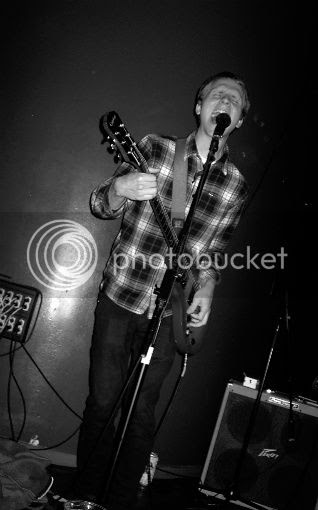 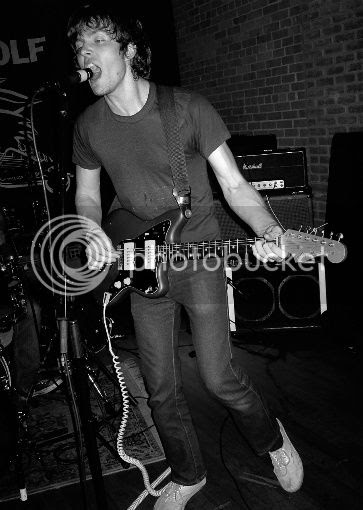 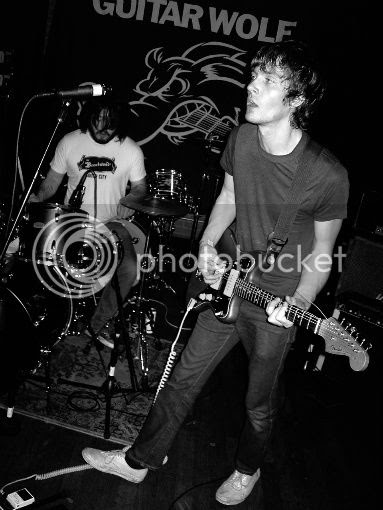 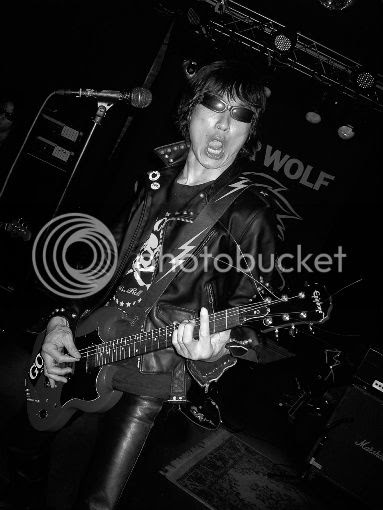 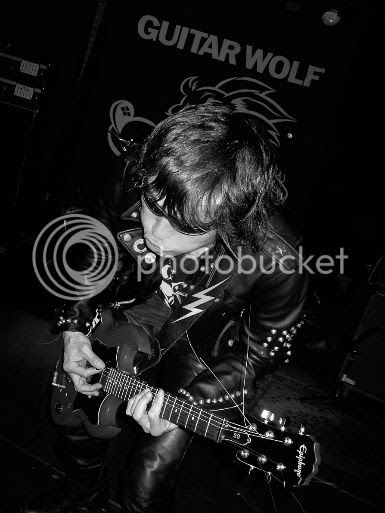 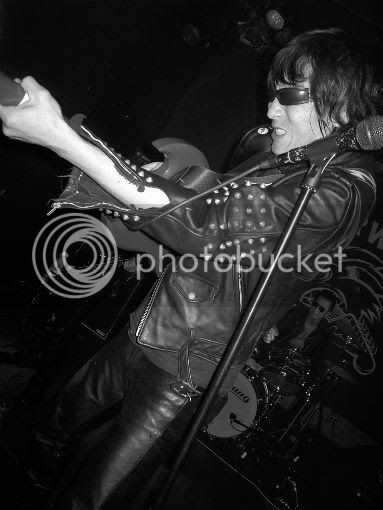 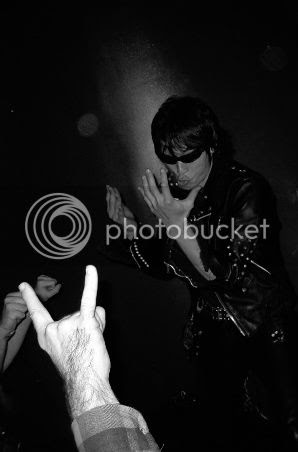 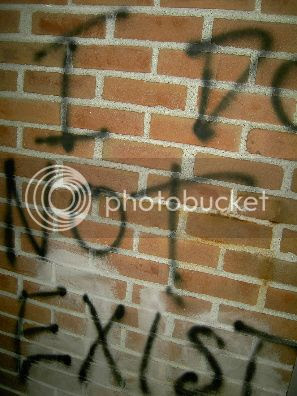 Pretty much slapped-together by Brushback at 8:49 PM

its fucking guitar wolf. no problem.
they played nyc friday nite and i almost cancelled my bands gig to go to the show. i should have, in retrospect.

I cannot believe you were able to see a cool show in Milford! How times have changed.

Supposedly Guitar Wolf has been playing really long sets, which probably in New York means they didn't finish until after 3am (yuk yuk). I wouldn't know, I left on Saturday after maybe 20 - 30 minutes or so, once my mind started to wander.

Holly, Milford center is still pretty yuppie, if that's what you mean.

Not exactly. I remember the pre-yup Milford, which while awesome in many ways was never, shall we say, a cultural hotbed.

Not sure how long the Daniel Street club has been there (it's on the other side of the same block that the "world's first Subway shop" is on), but Manic Productions has been booking shows there for a while now, so every so often something decent pops up.

Other than that, the town is still probably exactly like it used to be.

They played for about an hour and a half, (granted, some of that was padded out with some audience interaction).
I'd never been been to Daniel Street either. Got my eye on that Feelies show next.

This was a fun show for me mostly because of the people who were there. The 45 minutes waiting time in between bands was kind of a drag, I'd much rather basement shows where the changeover takes about 5 minutes.

On two separate occasions Saturday night I walked past different people who were having conversations about Liturgy. Don't know what the fuck that's all about.