I'm Too Smart To Know My Fate 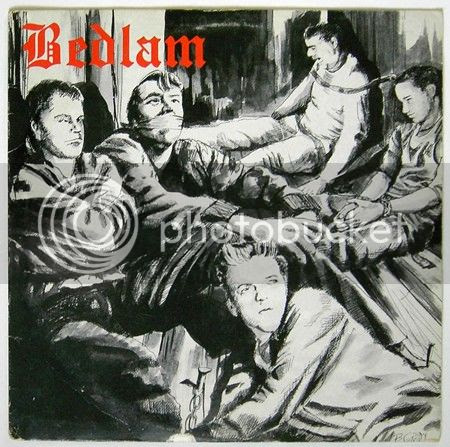 The Bedlam LP was among the first few batches of albums that I bought when I first started buying hardcore records back in '84/'85, although I remember the copy I bought back then had a folded-up sleeve, and this one doesn't. I guess this album was re-mixed and reissued in a regular jacket a few years after it was recorded in '83, and I never knew about it until just recently. I've also been calling this album "Bedlam's 'Total Bedlam' LP" for most of my life, but I guess that's not the real name of it, either. If they did actually re-mix this thing then I guess that's why this sounds way beefier than I ever remember it being, though all it takes is to play the second side again before I'm reminded of why I didn't think this album was all that hot to begin with: a few too many slow, dirgey songs and funny ha-ha covers and whatnot. Still, the faster songs on here sorta rip pretty good, especially now that they've been jacked up a bit, and side one barely clocks in at 6-1/2 minutes, which is shorter than a couple of 45's that I own. Bedlam even did a "fuck MTV" song before Jello even thought to write his, which is worth, like, a point, I guess. I remember not knowing exactly what WPLJ was when I first heard the song, and then seeing WPLJ billboards and ads on buses when I would visit NYC later on and thinking "ha ha, that's the shitty station that Bedlam made fun of." See, NJ hardcore has enriched lives in ways you probably never even thought of. 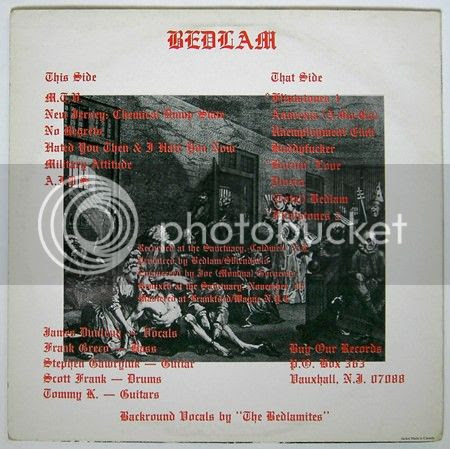 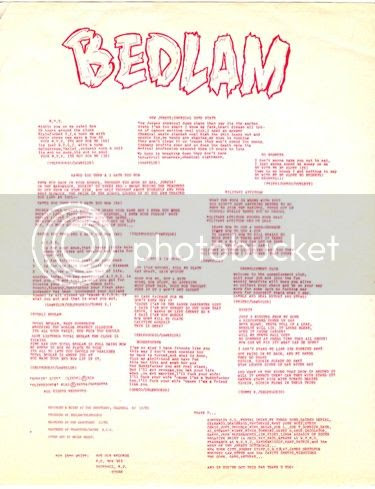 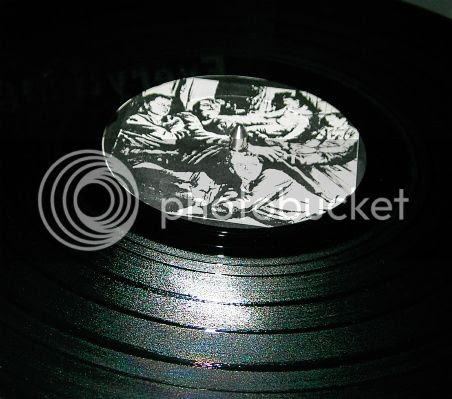 Pretty much slapped-together by Brushback at 3:55 PM

Sadly, I listened to a lot of WPLJ during my not-so-formative years.

In late 1970, Allen Shaw decided to install a 100% live "free form" rock format and hired John Zacherle, Vin Scelsa, and Michael Cuscuna (from WMMR and WXPN in Philadelphia) to do live shows on the station. On February 14, 1971, the station changed its call sign to WPLJ after Allen Shaw noticed the call letters as the name of a song on the Mothers of Invention record, "Burnt Weeny Sandwich" (1970). The song, "WPLJ", was originally performed by the Four Deuces in 1955 and stood for "White Port and Lemon Juice". The station became a politically radical and musically eclectic voice of the counter-culture. It received positive critical reviews from the "underground" press, but did not generate a large enough audience to become financially viable.

In September 1971, Allen Shaw and ABC Programming Executive Bob Henaberry designed and pioneered the very first AOR (album oriented rock) format, playing only the best cuts from the best selling rock albums with a minimum of disc jockey talk. The slogan of the station was "Rock 'N Stereo". The station would play the music of artists such as Led Zeppelin, The Beatles, Aerosmith, Jimi Hendrix, Cream, The Doobie Brothers, Steely Dan, Elton John, Deep Purple, Rod Stewart, and The Allman Brothers. The station would also play pop songs from artists such as James Taylor, Stevie Wonder and Carly Simon. The station was different from Top 40 stations (such as co-owned WABC) in that they played more album tracks. The audience ratings shot up dramatically, and WPLJ became New York's most listened-to FM rock station for most of the 1970s.

WPLJ also had Scott Shannon, who's just a big turd.

Bedlam may be the band I have seen perform more times than any other band. (and this does not include the times I played "in" Bedlam.

also, for some reason I still remember ALL the lyrics! go on, quiz me...

PS- weirdo record geeks may want to know that Tommy from Bedlam plays guitar on the Mourning Noise 7".

See? Somebody else calls it the Total Bedlam album, too...!

Does anyone know about a limited edition, color vinyl version of this album? I have one. It "feels" rare.
The sleeve is the folded out one, with lyric sheet, and the record is both blue and black.

I wonder if that's newer - I never even saw split-colored vinyl until the '90s, and even then hardly at all until just a few years ago.