Beats Waiting In The Dark For A Suntan 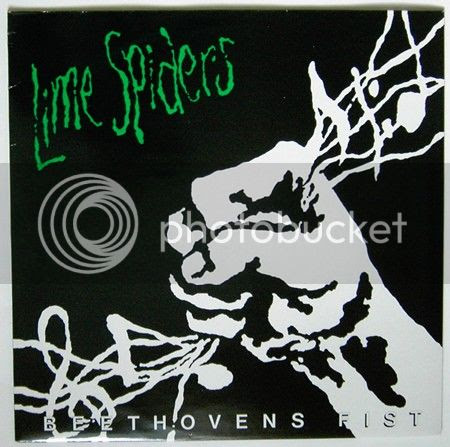 I'd mentioned once before that when I first bought this record I was hoping that it was maybe an early Lime Spiders LPs that I didn't have yet, since there's no date on the back, but when I found out later that it was actually their final LP (you'd think the haircuts woulda tipped me off), I never even bothered to open the shrinkwrap. Then John Beers said that it was halfway decent, considering-- and he generally knows way more about this stuff than I do-- so I finally got around to checking it out, and... it's okay. Honestly, if this album was the Rave-Ups from Los Angeles, California, instead of the Lime Spiders from Australia, I'd be mocking the shit out of it. The drums are mixed way louder than the guitar in that late-80's Bon Jovi record kind of way, and the lyrics are still painfully dumb, but overall I guess there's some stuff here that rocks out pretty good. Nowhere near as good as their early singles on Citadel, etc., but a lot more respectable than I would've figured. The production is totally of its time, though, which only points out how I didn't know how good I had it back then, when college radio stations were looking to play stuff that sounded like The Godfathers and The Cult, instead of non-rock like Animal Collective or Beach House or whatever crap it is that they like now. 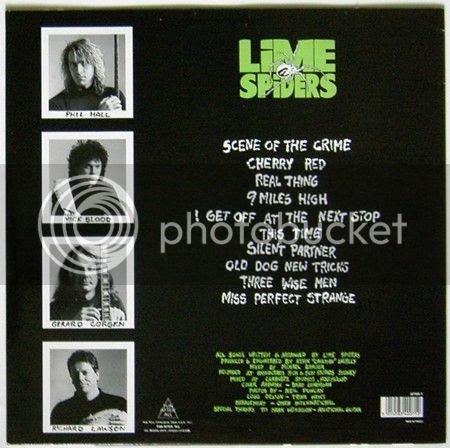 "I Get Off at the Next Stop"

This happens to be one of the best-sounding vinyl rips I've ever done,
so for one week only (maybe two) I'm going to make a .zip file of
the entire LP available for download: Pretty much slapped-together by Brushback at 8:27 PM

no way near their best. "Slave Girl" and "weirdo Libido" are some of my all time fav songs. but still rocks. Mick Blood's vocals are awesome. 80's production rules....

I remember at the time being very disappointed in this album but you talked me into it. I'm gonna give it another chance.

The Lime Spiders were definitely harder than any of the U.S. "Paisley Underground" bands that they shared the same asthetic with... but then again, they also had some really crap songs... so I guess it's a toss-up.

The mp3 files on this post are now listen-only (non-downloadable) files. They are now being hosted on my Vox page (which is accessible through any of the above listen-only links), along with all of the other songs from the record.