This Doesn't Shine But It Protects Me 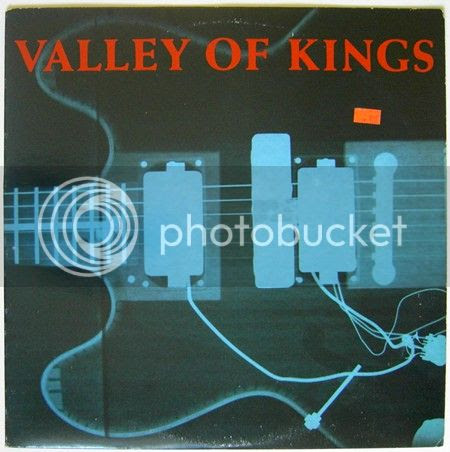 If there's such a thing as October Days Lite, then Valley of Kings could be it. The same brooding melodies, the same murky half-whispered vocals, the same surfy guitar parts and stinging basslines... Valley of Kings has 'em, only theirs are not nearly as dazzling or as interesting, of course. Still, had I known this, I might've given "Victory Garden" a few extra spins back in the day, but Valley of Kings weren't at all what I wanted to listen to in 1985 when this LP first came out, as I was neck deep into hardcore at the time. I did run an ad for "Victory Garden" in my zine that year, though that was only because Incas was also involved with putting out some C.I.A., 76%, and Lost Generation records (in fact, I think I traded the ad space for a copy of the second Lost Generation LP).

Not all of "Victory Garden" moves with any sort of October Days-style punk tempos, though; a good amount of this has the pall of early R.E.M. jangle hanging over it, as did most college rock back in those days, and it seems that Valley of Kings themselves weren't fully invested in the "rock" songs on this record, as they buried most of them on the b-side. In any case, this is still a fairly interesting document if you're at all interested in the '80s New Haven-area indie rock scene (you know-- The Grotto, Miracle Legion, Dumptruck, Bleached Black, "Some New Ruins", stuff like that), which may or may not be all two or three of you, who knows. Plus you get to check out the wonderfully arid production which passed for a good recording back then. 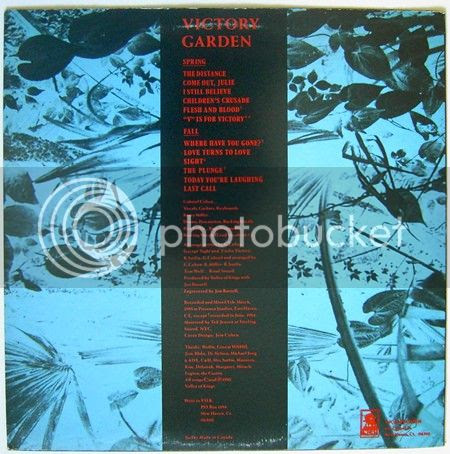 "Where Have You Gone?"


For anyone who wants a bigger chunk of this record, here are
all 9 (of the 12) tracks that I ripped in one file: 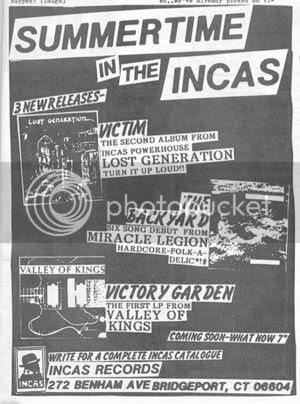 Pretty much slapped-together by Brushback at 10:03 PM

Kerry Miller and I still play in a band together... The Peacock Flounders. Our album Victory Garden/Valley of Kings was a Jackpot Pick in CMJ and reached #8 on the CMJ charts when it was released. It received 4 Star reviews in Sounds, NME, Cream and CMJ. Check out our new band on my website www.ronsutfin.com Ron Sutfin --- Valley of Kings/Camerface/The Peacock Flounders

Ron! Thanks for stopping by. I've got the Cameraface 12", I've still got to get to it so I can post that one, too.. (although Wilfully Obscure might've already written it up also)

Do you have the Valley of Kings 7" 45rpm vinyl single "Happy Hour" b/w "What I wouldn't give"? I have a few copies left if you want one. My band with Kerry (original drummer with VOK) The Peacock Flounders are playing at "The Quays" in Astoria Queens NYC this Saturday Feb 27th 46-02 30th Ave at 9pm if your interested in checking us out. rsutfin02@snet.net

I don't really travel to NYC to see shows anymore, but I'd definitely like a copy of the single... I don't even think I owned it back in the day (though I've got the a-side mp3 on my computer). I'll poke around on your web site, maybe there's a button where I can send you some postage money for it...

The mp3 files on this post are now listen-only (non-downloadable) files. They are now being hosted on my Vox page (accessible through any of the above listen-only links), along with the handful of other songs that I ripped from the record.

I started singing "What I Wouldn't Give" today, just out of the blue. It's a piece of vinyl that never got sold or lost in my many moves. Thanks for posting it.