I Respond To Other Hopes 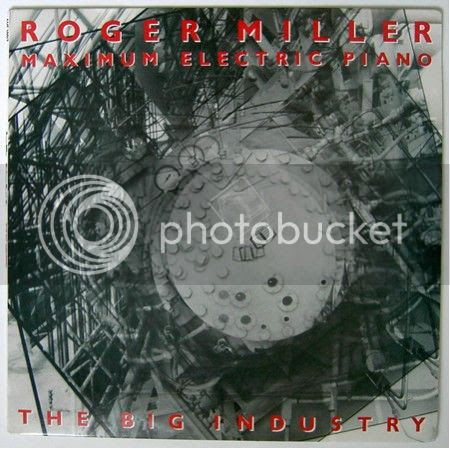 "Maximum Electric Piano" was one of Roger Miller's projects after the first Mission of Burma breakup, when he set the guitar aside and moved on to piano partly because of tinnitus. I can easily picture Miller's brain as one being on constant boil, and he attacked the piano like a mad scientist, jamming haircombs, roach clips, bolts, and pieces of wood into the strings to make all kinds of weird sounds.

I saw Maximum Electric Piano after "The Big Industry" came out, at the Night Shift in Naugatuck (must've been '88), and Roger was fairly animated during the show; while he was busy jamming things into his piano before each song, he would hold up all the different implements that he was using and explain what he was doing, so there was no artsy pretense at all. I think it was also the first time I ever saw someone use a digital delay on stage (which I guess is fairly commonplace now), where Roger would play one passage to a song and then put it on constant loop so that he could play another part over it. Of course, being a rabid Mission of Burma fan-- an easy thing to say now but not so much back then, especially to anyone outside of New England-- I was mostly in awe of what was going on, even if it was also a little saddening, like watching your favorite ballplayer being reduced to a pinch runner or something.

One of the things I remember most about the show was earlier that day, when I accidentally figured out how to rewind the film in my camera after I'd already taken a picture, which I thought would lead to some interesting effects. I needed to play around with it first, so I took a picture of a movie poster that was in my room, and then later at the show I told Roger what I was up to. He was really cooperative about it, and stood next to the payphone at the Night Shift, beer bottle in hand, for what I hoped would be my astonishingly artistic double-exposed portrait of Roger Miller. It didn't work, naturally, though the picture at least came out halfway decent. I still had the photo up until about 5 or 6 years ago, when a soggy basement wiped it out.

There are no guitars or synthesizers used on "The Big Industry", which makes for an intriguing idea (much like my double-exposed photo), though some of it sounds better in theory than in practice. I prefer the tracks where Roger just makes a lot of noise, like on "Hammers" or the sprawling, seven-minute "The Big Industry", rather than when he tries to create a regular song and ends up with something that's kind of over-baked. Roger did a cover of "Manic Depression", which turned out to be a good idea for one reason, as it was the first thing that all the local write-ups would mention when plugging the record: "He plays Jimi Hendrix, but on a piano, blah blah blah", because lousy music writers always get excited whenever somebody they don't quite "get" covers a classic rock tune... I guess it makes them feel reassured about their outdated musical tastes, or something.

Thank god for guys like Roger Miller, or we'd be listening to a lot more shitty music nowadays. 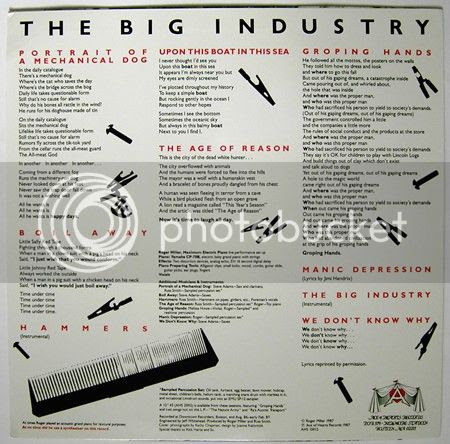 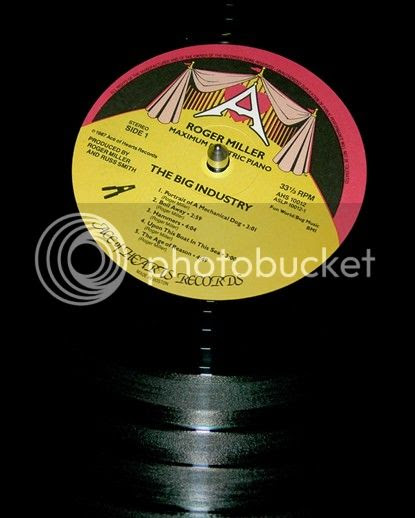 Pretty much slapped-together by Brushback at 9:38 PM

I was at that 88 show as well and played some of this record and the one before it on my radio show at school. I filed it under "nice try". The No-Man stuff is really good, the SST and NEw Alliance records are both excellent and he did a "classical" record around that time that is good as well. I forget the name of it and I am too lazy to go down to the basement and pull it out.

I forgot until the Anthrax Club book came out that Roger had also played the Anthrax, and Scott Munroe (A. Dying Gymnast) opened...

The mp3 files on this post are now listen-only (non-downloadable) files. They are now being hosted on my Vox account (accessible through any of the above listen-only links), along with three other tracks from the LP which weren't included in the original post.

For those of you who missed the boat, I will do my best to respond to any e-mailed requests for the original files, though I'll probably send them at 112kbps because the 320kbps files are pretty big.

Here, I made a link to the 8 songs that I ripped from the LP (and not just the 5 songs that were originally available on this post). This .zip file includes the album artwork, also.

This link will probably remain active for a month or so, in case anyone else is interested.

excellent site, found through searching for dredd foole, long forgotten by so much of the world.

any chance of a reup of this, since i missed it the first time. Roger C Miller material is so hard to find, whether it be real copies or downloads

thanks for the site, it's great

Again, the link will go dead after a little while.

Did the Mediafire link work for you? I can't get it to work on my end, it keeps showing "Error downloading file, retrying..."

I re-uploaded it, but the new link still does the same thing.