It Started Bad And Now It's Worse 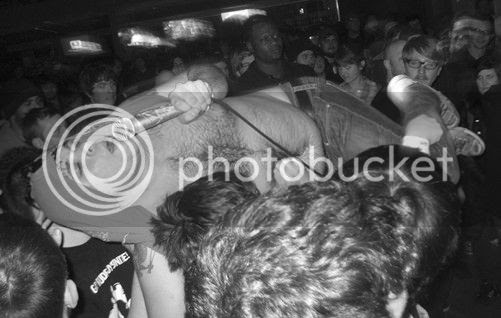 (Conniption Fitts photo swiped from scenesterdumpster's Flickr page)
The Conniption Fitts announced on their web site this past weekend that they're going "on hiatus", which normally wouldn't be that big of a deal-- they're from Chicago, so who cares, right?-- except that their song "I Can't Sleep" is one of the best Black Flag "Nervous Breakdown"-style pounders that I've heard in recent memory, right up alongside The Guns "I'm Not Right" and the New Bomb Turks "Straight-On Chaser" as far as I'm concerned.

I first heard "I Can't Sleep" about 3 or 4 months ago on the Dead Broke Rekerds tape comp #3, which as far as I know is the only place you can hear this song (other than The Conniption Fitts' MySpace, which is currently sporting a Sonics cover, too). Plus now you can also get it here, so strap this fucker on and buckle up.

Pretty much slapped-together by Brushback at 8:49 PM

great name for a band!

It might actually be funny that there's another Conniption Fits (without the extra T), but they're a wannabe "pro"/commercial rock band from Boston who really suck.

The mp3 file on this post is now a listen-only (non-downloadable) file. I think this was the single most downloaded song that I've posted so far. Anyway, for those of you who missed the boat, I will do my best to respond to any e-mailed requests for the original file.