Why Should You Care Now? 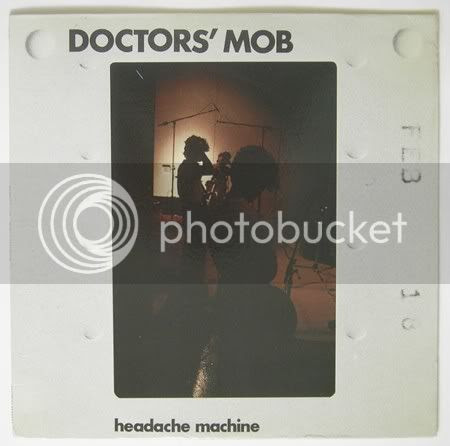 Doctors' Mob "Headache Machine" has been one of my favorite records practically since I first listening to records-- meaning the indie/punk kind, of course-- and I was still listening to it regularly enough to put it on the "Currently Listening To" list in one of the middle issues of Brushback, ten or eleven years after I first bought it. I've had to buy this LP three times from playing it so much, although all that buying has netted me only two copies of the actual record, which is a story that I'll be getting to in a minute.

Steve Collier was in the Big Boys before starting Doctors' Mob, who were the first and only "cow-punk"-type band back in the '80s to really grab me. Rank and File might've been doing it sooner, but they pretty much sucked as far as I was concerned (one of the worst shows I've ever been to was the time I got stuck seeing Rank and File in Boston, which is a story and a half by itself). Doctors' Mob, on the other hand, were basically the Replacements only with a lot more slide guitar, and I had no problem dealing with that. (For reference, check out "See Monkeys", which is a lot like "Seen Your Video" and "Buck Hill" mixed together.)

That's not to say that Doctors' Mob were some kind of knock-off band, because "Headache Machine" was definitely head and shoulders above almost everything else that was going on in rock at the time. For mid-'80s rocking I would place this slightly behind "Let It Be" and solidly ahead of "Done With Mirrors", and I'm being completely serious here.

My original copy of this had gotten worn to death, of course, so when I bought a USB turntable about a year ago, I figured it was time for an upgrade. I found a used copy at a reasonable price on eBay, but like most of the records that I've been buying lately (especially ones that I've already owned once), I filed it away without even looking at it. When I finally took it out of its sleeve a few months later, it turned out that the record inside the sleeve was actually a 12" single of Len Jewell doing "Slam Dunk" ("I sure love this full-court action, baby"), which woulda pissed me off if it wasn't so hilarious. I mean, at least the labels look sorta similar... anyway, I found a sealed copy not too long ago, so now I've got three "Headache Machine" jackets but only two records. I guess if I ever pass my records on to somebody, I'll have some explaining to do. 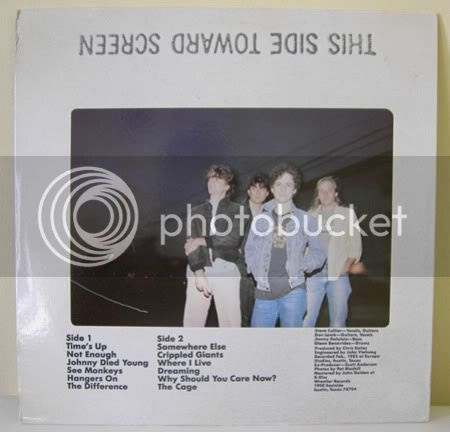 "Why Should You Care Now?" 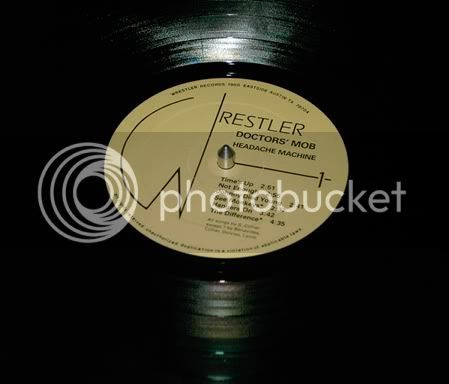 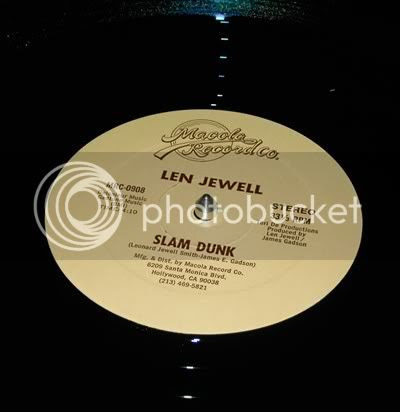 Pretty much slapped-together by Brushback at 9:43 PM

I'm probably not the only one now wondering: what's the story with seeing Rank and File in Boston?

Since you probably are the only one wondering, I'll give the short version:

I'd taken the train to see Big Black and Killdozer at The Channel, but they wouldn't let me in (this was back when I was 21 or 22, and Boston clubs are unreasonable strict about people with out-of-state IDs, especially when they only look like they're 15). Somehow I figured out how to take the Metro into Cambridge to this club I'd never been to before (TT the Bear's), just for something to kill the rest of the night off. Rank and File were playing, and they totally sucked. One of the worst bands I've ever seen. They had this long-haired second guitar player who didn't really fit in with the rest of the band; off to the side playing solos and stuff, that kind of thing. At the end of the night I was leaving the club, and the long-haired guitar guy was on the payphone by the front door, trying to set up a hotel room for the band. It was like a total loser, menial, non-rock star way to end a totally miserable night.

I think I spent the next day driving around Boston with Al Quint and a European friend of his, listening to the Zero Boys cassette.

Great post - that is one of the best albums of the 80's. I was lucky enough to see them live back at the El N Gee. The EP with their cover of She Said She Said was also cool; their second album on Relativity was not so great

Man, I loved this record and still break it out every once and a while. All of their records were good, even the later one with the punk looking bassist on Relativity. I saw them on a rainy night in DC and we were, literally, the only ones there. We told them they could keep our money and they didn't have to play, but they did anyway and kicked some serious ass.

Did you ever listen to Dancing Hoods? Similar post HC power pop band, although I doubt their recs hold up as well.

I'm completely unfamilair with the Dancing Hoods! Perhaps I should do some investigating....

I saw Rank And File suck at the Antenna in Memphis circa 1986-87 & that long-haired, miserable-looking guy was indeed Alejandro Escavedo.

Thanks for this, Brushback. I have a practical question: I would like to use the image that you use in an upcoming book publication on new sincerity. Do you happen to have any idea whom I can contact for copyright permission? Emailing you after a long exhaustive search for the band and for Wrestler Records :)

Sorry I have no idea!! I'm sure Wrestler has long disappeared, I don't think they've put out a record since 1990.

Bill Daniel is a photographer who took a lot of photos of Texas bands back then, including the Big Boys (another band of Steve Collier's), so maybe he knows:

The "long-haired guy" couldn't have possibly been Alejandro Escovedo. He left Rand and File in 1983, after the band's first album. Not only that, but Escovedo's hair was relatively short during his time with the band. And he also had not developed the skills to be playing guitar solos--he was strictly a rhythm guitar player in that band.