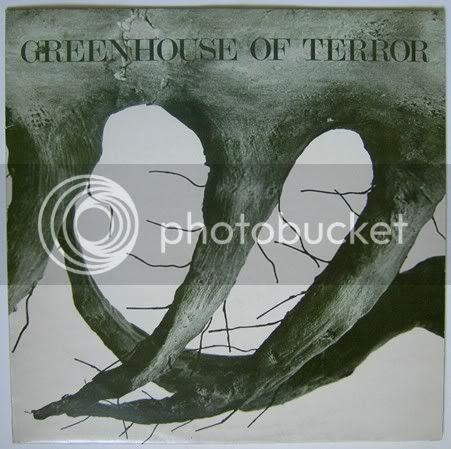 Here's the Greenhouse of Terror 12" that I first mentioned about a year ago (sure, like anyone remembers that), one that I originally fished out of the used bin at Rhymes Records in New Haven around '86/'87 for maybe three bucks or so. This was back when you could buy almost anything from Australia and reasonably expect that it was gonna be great, even more so if it had a certain pedigree (Citadel, Aberrant, Waterfront, etc.). In this case, the Foetus and Black Flag t-shirts on the back cover were enough of a clue that Greenhouse of Terror were worthy of a measly three dollars, or that they had a decent sense of humor at least.

All in all, this is one of my favorite records from that time, and not just for the way that I casually stumbled upon it, or for the old-school press type lettering on the back cover with that casual Aussie slant to it ("noises onto tape", yes). The two songs on the a-side make up a couple of the best back-to-back songs you'll ever find on a 12-inch: "Compulsion", which davey-lopes along in a way reminiscent of The Fall, and the spastic "Now She's Shakin'", which is about as close as any favorite song of mine is ever going to get to sounding like the fucking Hoodoo Gurus. 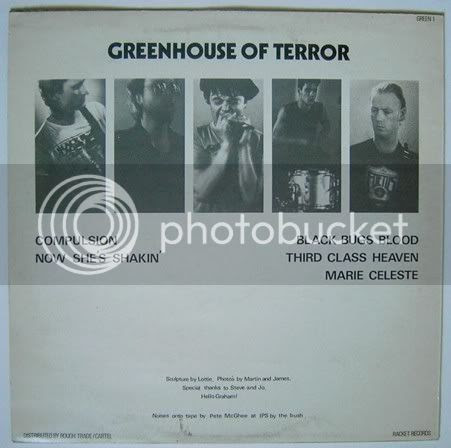 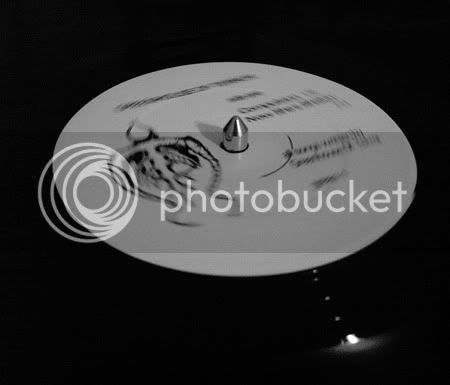 Pretty much slapped-together by Brushback at 8:31 PM

THE GREENHOUSE OF TERROR
WERE FROM WEST LONDON,AUSTRALIA!

We were a west London band; only G'Dave, the guitarist, was from Australia. We all worked for Caroline Exports in Acton which was part of Branson's Virgin empire. Glad you like the record. Simon (the bass player)

Ha! This whole time I thought this record was from Australia, though now when I look at the sleeve I can't see any clues...

I bet it's because when I bought it at a local record store (Rhymes Records, in New Haven) it was in the Australian bin. At least, I'm pretty sure.

I'm not surprised it was in the Australian bin - we were influenced by the likes of The Hoodoos, Birthday Party, The Scientists and The Flaming Groovies. Simon

THANKS FOR FILLING IN THE GAPS
SIMON
CHEERS,GUY

Jeez, one guy was from Australia, at least. Plus there's no address on the record!

Really cool that all you guys stopped by, though... you made a great record.

The mp3 files on this post are now listen-only (non-downloadable) files. TOUGH LUCK, FUCKEN LIMEY! No, actually, for those of you who missed the boat, I will do my best to respond to any e-mailed requests for the original files.

Please feel free to give the Greenhouse away as a download. Half of us don't care and I think the other half are probably dead! I've got a shit load of the original 12"s under my bed if anyone wants one! Simon - the bass player

How the bleedin' ell did this rubbish get down under, 3 dollars was way over priced, give us a copy Simon, mines all scratched, Mark (drummer)

I knew about the band members working at Caroline Exports.
My mate Terry Harmes (from Fflint, N.Wales), worked there at the same time with them. In fact the band had got the name from Terry as he had related tales of a band of the same name from N.Wales who had ceased to function in 1982.
Terry sadly died in september 2008- R.I.P.

Really sorry to hear about Terry (or Legs as we called him). I shared a flat with him whilst at Caroline and he was my business partner for a while. He hit the bottle in a big way - I expect that's what finished him off.

Bet you're sorry you put this damn record up. It's like some sort of sadfuck reunion... maybe it's time for one. Should be able to find Guy hanging out a window in Notting Hill shouting obscenities at the police and James is surely not too far from the Westway. Just about to leave Cannes after Midem music conference. Phil Stoker, Tony Harris, Oliver Comberti and even Nik Pod in attendance. Terrifying. Anyway, I have a tape somewhere of the Andy Kershaw session if anyone is into further aural torment. G'Dave

Hello to the other 'anonymous' who knew Terry Harmes.
Indeed he was known as 'Legs', this knickname was with him when we were in primary and Fflint high school.
The actual G.O.T. name (for the earlier phantom Fflint band) was provided by Russ Taylor.
I stayed a few weekends down with Legs in west hampstead and I did meet some of his work colleagues. I think there was one bloke called Howard (?) who was in a psyche-type band who had a name that was really difficult to pronounce, they appeared on some compilation album that they had there.
They were certainly lost weekends down there.

Hi Tim. Howard was in a band called Mxistoplix or something similar - named after a Superman baddy I believe. I too spent many evenings coughing my guts up at Terry's! He did a mean bong! Mark and G'Dave, I'd love to hear from you. Email me at simonshaw@rock.com. I still keep in touch with Jim. Don't know where Pat is though. Simon The Greenhouse bass player

Hi, my name's Pat and I... used to be in the Greenhouse of Terror, and I'm very proud of it! I still live in London. Used to see James in Ladbroke Grove every so often, and spoke to Aussie recording tycoon G'Dave a few years back, but that's it. Wish you all well.

If Mark Baines or Pat Fanning see this (or if you know them), Greenhouse of Terror are re-forming for one night only with James, Guy, Simon and G'Dave. We'll hopefully be playing on a boat at the Albert Embankment, London, on November 1st 2014. Email simonshaw@rock.com