How Could I Hope To Kill Without It 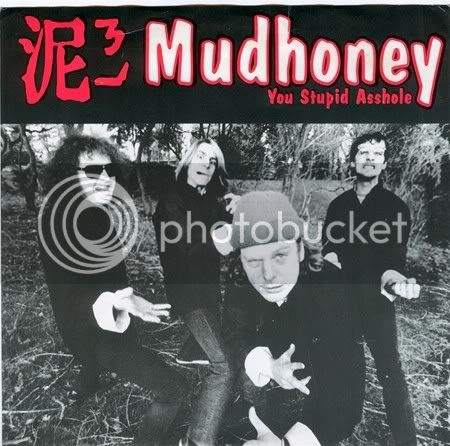 The day I bought this, I found it misfiled in a box of old heavy metal 45s; y'know, Scorpions, Dokken, White Lion, all crap from the 80's, and almost all of them without picture sleeves. Why I decided to thumb through a box of crappy 25 cent metal 45s in the first place is anybody's guess, but I found a Fireballs of Freedom 7" in there also, so maybe some sketchy metalhead who every so often bought a really cool record traded them all in one day, who knows. Or maybe it was from Mike Gitter's record collection, and these were just the ones he was throwing away.

Anyway, here you've got Mudhoney (Seattle's best pretend punk band) covering the Angry Samoans' "You Stupid Asshole", with Gas Huffer on the flip doing "Knife Manual" from the awesome Silly Killers EP. There was also a 12" version of this (and a CD EP) with two extra songs, as well as a clear vinyl 7" shaped disc, but I'm guessing sketchy metal dude/Mike Gitter kept those ones for himself. Greedy fucker. 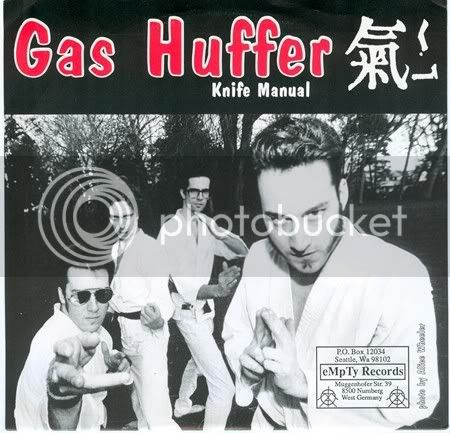 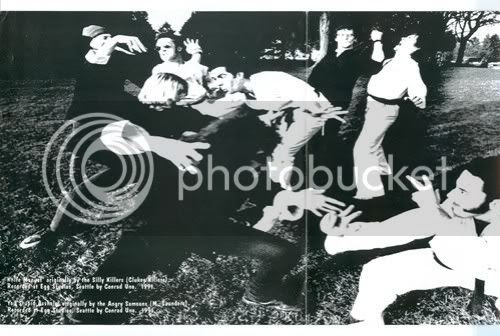 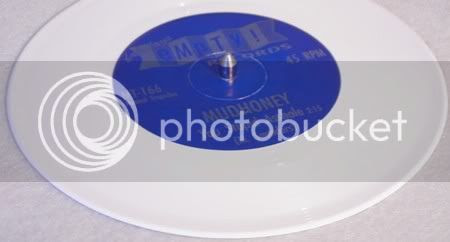 Pretty much slapped-together by Brushback at 9:57 PM

I was going to cry foul you for not including the gatefold inner kung-fu showdown, and look at that...you had the blogging chops and wizardly foresight to include it!!

Would you believe I still have the envelope from when I mail ordered this (probably because someone from Empty wrote "Cripple Fuzz Mastery" on the back of it). This post might spur me to collect all my Angry Samoans covers in one place.

I don't think I've ever saved an envelope, though I'll usually save everything else that comes in the mail with a record (flyers, handwritten notes, stickers, catalogs) as long as it fits inside the sleeve.

The other week I got in the first release of the Spent Planet Cassingles Club. The tape came with a big red lollipop and two plastic farm animals. I'm not sure if I'll be saving those.

I've eaten the bubblegum from a 20 year old pack of baseball cards, so I'm sure a cassingle-related lollipop won't kill you. That's like that one Big Black album that came with all the chump ballast.

The fact that there exists a cassingle series buoys my hope like nobodies business. The true bastard of modern formats (although those tiny tiny CDs, the 3"s..are kind of maniacal too...I still have the "Bonus Fat" one from The Descendents in its four minutes of glory).

Not only is it a cassingle series, but it's subscription only and limited to 25 subscribers (yes!). Plus, it's gonna have the almighty Closet Fairies at some point.

Glory is to Spent Planet!

It's like a lo-fi version of that Pushead singles club! (I still have the TAD single with the glow in the dark rice paper sleeve that turns him into a vampire), and that RFTC/Bloodthirsty Butchers split. I'm going to have to investigate this Closet Fairies business..so many new bands I must discover, so few hours in the day!

I'm gonna post some Closet Fairies soon, that's what I'm gonna do. They're no Chinese Telephones, but they're alright. Shit, they're just another Massachusetts pop-punk band. Offshoot of Witches With Dicks. Yeah, there's a name that rings a lot of bells...

Well, anyone with half the ring of the Chinese Telephones is OK in my dirty lil' book of sound!

Chinese Telephones are the shit. Or were the shit, actually.

If I know about them, it must be past tense. Which is why I won't invoke Blood City Shack Up or Estrogen Highs lest they self-destruct like the Mission Impossible messages 30 seconds after I hit "submit"..oh crap, I jinxed it didn't I?

The first time I saw them was with Love Or Perish and The Old Haunts at the Cake Shop early last year, and I bee lined to them ten seconds after their last note bugging them for recorded sounds.
www.myspace.com/welcometobloodcity
and half of them are in another swank outfit, Secret Cutters. As far as I can tell, that isn't an allusion to the shame of New Haven minor league baseball.
http://www.myspace.com/secretcuttersnyc
I bet they're planning to break up right now!

I used to love going to Yale Field when the Ravens played there, but, yeah, the Cutters were not good.