If AIDS Don't Getcha Then The Warheads Will 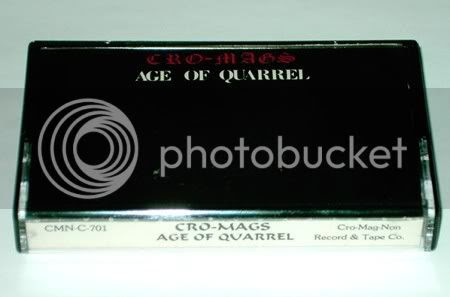 The first time I heard this tape when Ray Cappo lent me his dubbed copy so I could make a copy for myself; before I returned Ray's tape back to him I recorded the Replacements "Stink" onto the end of side two, which had been blank. Not very Youth Crew of me, I know, but this was a while ago (early '86, I'd imagine), before there was a manual regarding these things. I figured Ray would think "Dope Smoking Moron" was pretty funny, though I don't know if he appreciated my gesture. A short while later I was able to buy my own real copy of the Cro-Mags demo-- the copy that you're looking at here, natch-- which I'm fairly positive I bought from Duane at Some Records in NYC.

It sorta goes without saying that this demo was pretty mind-blowing at the time; I still think it ranks alongside "Victim In Pain" as one of the two best '80s NYHC albums ever. This was back when I was really into Negative Approach's "Evacuate", which I think is the song that drew the battle line between the Mid/Northeast style of hardcore and what the rest of the country was doing, so when I first heard "Malfunction" I was pretty psyched, to say the least. John Joseph brought the NYHC way of singing-- using a growl, then dropping his voice and talking-- to perfection on this recording (Tommy Carrol of Straight Ahead was also one of the first to be really good at this, I remember), which everybody then copied afterwards.

Then, of course, there's "World Peace", with its totally un-PC line, "If AIDS don't get ya then the warheads will"; if you were around back then and saw how the hippie MRR types were trying to bury NYHC, you'd understand what kind of a statement that song was. Not that I'm saying you'd like it any better, or agree with it necessarily, just that you'd understand where it was coming from a bit more. Since "World Peace" was my favorite song, that's where the tape was stopped the last time I put it back in the case, so now that one song sounds pretty wonky. Whaddya expect, it's a cassette tape for chrissakes.

I'm pretty sure the Cro-Mags intended this to be not just a demo but their actual first album, but then once they got signed they had the money to make a better recording and the tape became secondary. Myself, I thought the re-recorded "Age of Quarrel" LP sounded a bit too commercial compared to the tape, and even though I thought the songs on the record were still great, once my initial enthusiasm wore off I don't think I listened to the actual LP more than once or twice after that.

One Cro-Mags story I have that's sorta funny came after Ray and Porcelly had moved to New York, and a bunch of us were working on the New Beginning record label (Underdog, Crippled Youth, etc.) together. Porcelly called me up, pretending to be Kevin Mayhew from the Cro-Mags and saying that the Cro-Mags liked what we were doing and had some songs that they wanted to put out as an EP on New Beginning. Of course, I called up Ray right away-- "Can you believe it, we're gonna put out a Cro-Mags record!"-- and Ray said, "Man, did you give those guys my address?" And I said, "Yeah, they said they had a tape for the record that they wanted to drop off with you." Ray said, "Man, Harley just walked in here, saying 'You can thank your dumb friend in Connecticut for letting us know where your apartment was', and walked out with my TV!"

After Ray told me that it was all just a joke, I was pretty bummed out that I actually wasn't going to be putting out a Cro-Mags record. 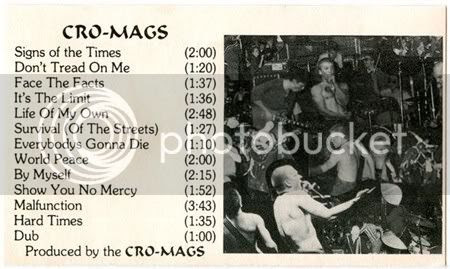 "Show You No Mercy" 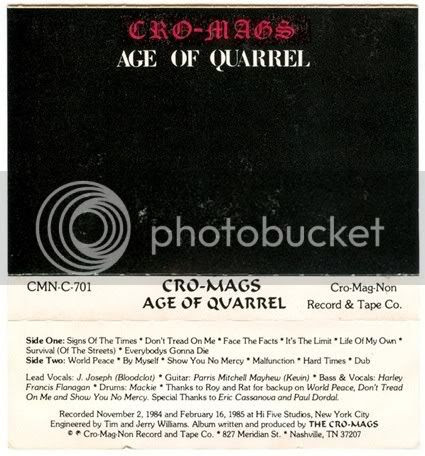 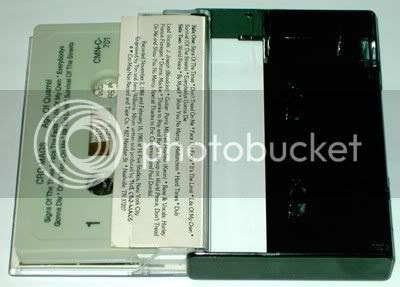 Most times, I think N.A. were the best hardcore band ever.

NA certainly set the benchmark high, but I think that early Cro-Mags stuff is equally on par. I can't understand why my 35-year-old brain still finds these songs so damn relevant and inspiring. Really cool post.

It might just be a matter of a few year age difference, but the Cro Mags never did it for me. That whole "Ritz Era" of NYHC really upped the lunkhead factor, too.

However, I completely and utterly agree that NA may very well be "the greatest hardcore band ever". It delights me to no end that I, as a 45 year old man, can still listen to them...and want to punch someone in the face. Figuratively, that is...(I'm a lover, not a fighter).

Poison Idea's "pick your king" is another one that distills the essence.

This brings back such weird memories of being 14 or 15 and actually being a little terrified before a band played because you knew it was going to be something along the lines of a pad-free football game (I still have a screwed up septum from getting clobbered during a Rest In Pieces set at the superbowl of hardcore at the Ritz..while New Kids On The Black played right down the street to boot).

I hereby request a N.A./Laughing Hyenas/L-Seven history lesson for the kids. For the kids man, do it for the kids. Oh..and someone should upload whichever Shyster Shyster Flywheel tape Kevin Roche himself palmed me with "Yoko Diablo" on it. I miss that a bunch.

I would like to hear that Shyster Shyster and Flywheel tape, too. I'm sure Malcolm has it, maybe I can trade him something for it.

I never went to one of those Ritz shows-- not my thing. I saw Rest In Pieces a couple of times, though, at the Anthrax and in Enfield, and they ended up being a pretty good band. We used to always goof on their 7", but then the LP came out and was great, and Armand turned out to be a pretty cool guy.

"New Kids On The Black" is my best typo of the week.

I'd have to say "Five Golden Rings" off the LP is still in my top ten guilty pleasure hardcore song list, and those Ritz shows were a little over the top. I think I went that year because it was the last Agnostic Front show before Roger went into the hoosegow. Plus, Boogie Down Productions played, which in a pre-"Judgement Night" soundtrack word seemed really novel to me.

"We Gotta Know" was the only reason to buy the first Cro-Mags LP, if you already had the tape. I'd try to listen to the LP, but after a few songs I'd keep going back to the demo instead, so I quickly gave up.

I had the same problem with the Crumbsuckers. They were great when I saw them live (the Krakdown guy sounded just like John Brannon), and then their LP sucked.

Too much freakin' speed-metal back then ruined the old school NYHC bands... of course, people now don't see it that way, it's all "hardcore" to them.

"I would like to hear that Shyster Shyster and Flywheel tape, too. I'm sure Malcolm has it, maybe I can trade him something for it."

Go right to the source, ya' big lug! I'll blow the dust off one and hook you up!

Bruce, I have like NO Shyster stuff except for the song that's on the TPOS 100 comp. I'm hurtin, man, I need to hear some of that.

I was just telling someone at the radio station how back in the tail end of the 80s, ALOT of "hardcore" bands had the one metal dude who was slumming for beer money. It'd be a lineup of short haired guys with spider web ink, converse, and crappy Peavey gear..and then the odd man out stage right with the feathered Megadeth hair, huge reebok sneakers, machine gun bullet belt, and pointy expensive metal guitar to play all the leads and solos with. It's only gotten worse.

The only Shyster song I still own is off "The Way It Was" 7". I do recall that the cassette I had contained the creepiest half-ass xerox band photo this side of the sticker that came with the Zombie Squad cassette. How I'd love to hear that stuff again in all its Marxist tomfoolery.

Oh, man, Sean-- you don't even know how "pointy metal guitar" brings back memories. We used to call any band that didn't play Les Pauls or Strats "warlocks": "Hey, you got your warlock guitar!" Then all of a sudden, all these straight edge bands started playing with these pointy Ibanez axes and shit, and it ruined the whole thing.

I know what you mean, about the metal guy to play solos-- hardly any of the old school hardcore guys could play for shit, so they'd recruit some outsider to play all the hard stuff for them so that the headbangers would buy the records.

I think the first time I ever noticed this was Francois with SSD.

When I convert that Shyster stuff, I'll gladly hook you up!

That would definitely be cool.

The mp3 files on this post are now listen-only (non-downloadable) files. They're now being hosted on my Vox page (accessible through any of the above listen-only links), along with one extra song, "Sign Of The Times", which wasn't included in the original post cuz it's a bit glitchy.

For those of you who came to the party late, I'll do my best to respond to any e-mailed requests for the original files.