I'm A New Shade Of Black 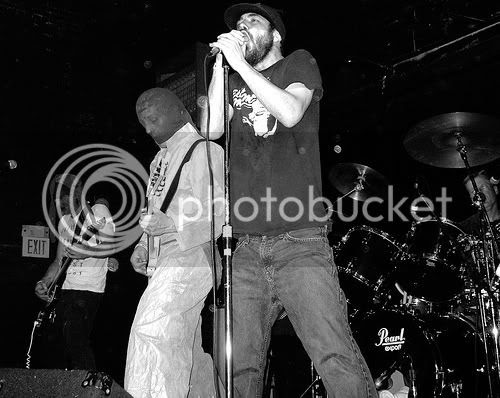 Creepdust were surprisingly awesome when I saw them open up for Monotonix back in July-- some real old-school late-70's/early-80's punk rock, in fact they kept making me think of a bunch of West Coast bands from that era, like The Flesh Eaters and the Germs and Crime and the Avengers and so forth. Creepdust are the genuine article, too; they've got Malcolm Tent on bass, who's about as old school as it gets, a real no-bullshit frontman (Tony), and a well-tuned sense of punk rock showmanship, all of which makes them a great band to watch.

They hadn't recorded anything yet back when I first saw them, but they've since opened up a MySpace page a couple of months ago (www.myspace.com/creepdust) and put up a bunch of cool songs-- like "Dark Entry", which has some rockin' guitar parts and then a spaced-out middle section that reminds me a bit of Burnversion (dunno if anyone's ever heard of them)... then there's "New Shade of Black", which is probably the one I like the most.

I need to make a point to see these guys again; they had a show last night in Danbury, but I blew it off, thinking I'd go see Oiltanker at Whitney House instead. Of course, I ended up staying home and not doing much of anything, which figures.

Pretty much slapped-together by Brushback at 4:22 PM

To further the old school theme, they can be connected directly to Hed, The Mill Valley Taters, Bunnybrains, Gnufuz and by association: Stratford Survivors(check their recent Anthology Records release!) and October Days.

Jim Roberto is the Yuri Gagarin of guitar in western CT. If you saw him in HED, you would know what I mean.

That's Jim from HED on guitar? Oh fuck! I didn't know that!

The mp3 file on this post is now a listen-only (non-downloadable) file. It's now being hosted on my Vox page (accessible through the above listen-only link), along with one more Creepdust song, "Dark Entry", which wasn't included in the original post. Great song, too - cool guitar work!