It's Not Going To Be That Easy 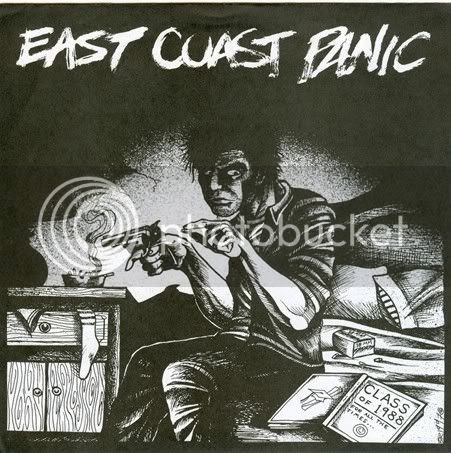 East Coast Panic was Al Pist's band right after The Pist, or in-between endless Pist reunions, whichever way you want to look at it. They sounded somewhat like N.O.T.A. or a speedier Iron Cross, with traded-off vocals (which wasn't always the best idea). They were also a ferocious live band, and I saw them once or twice if not more, usually at the basement punk shows that Al used to put on at his house in Waterbury. None of the E.C.P. pictures I took ever made it out alive, unfortunately.

East Coast Panic's record sleeves and flyers always looked good, and Al was usually pretty steadfast about whatever he was doing. I remember having a lengthy discussion with him by mail about trying to get more people out to see Ct. bands at shows and so forth, which ended up with Al telling me over and over again how I wasn't punk enough... which is kinda funny, now that I think about it.

I still have E.C.P.'s "Nowhere City" EP kicking around here somewhere, and Al's still making music, also, though in more of a folk-punk direction; I have a "God's Left Hand" CD that he put out a few years ago, though you're gonna have to let me get back to you on that one. 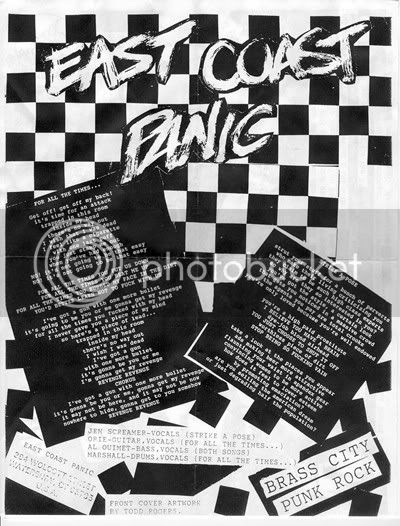 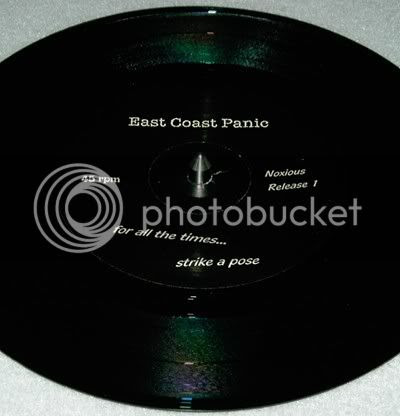 Pretty much slapped-together by Brushback at 11:03 AM

Yeah. Great sleeve; if the flyers had the same 'corporate' look - I'm imagining Al Pist getting really pissed here, and frothing at the mouth - I can identify with what you say, Brushback.

Folk-Punk, eh ? Sounds interesting. I will maintain a look-out for "God's Left Hand", should you ever dig that one out.

I'm gonna stay away from the "God's Left Hand" CD for now (even though Jeff Wilcox plays on it!), but I should be able to post "Nowhere City" eventually...

Uh, wasn't there another band on this record?

Yes, there is. I didn't feel like ripping their songs.

Hey,
Al Pist here! For the record, I don't think that I've ever told anyone that they weren't punk enough. "Over and over again." C'mon! That pretty much goes against my entire view of punk. We used to send out newsletters bitching about how everyone wanted a DIY place to see shows and when we set up one, not too many people came...anyway some people (not gonna mention any names!) took this as a personal attack...So whatever. There's the other side of the story for your readers to consider, not that all these historical details mean much to anyone but us! Yeah, so anyway...Thanks for putting up this ECP stuff for people to check out. Not too many folks are interested in our stuff these days. Hope to see you around sometime! Keep on bloggin'.
al@thepist.com

Al, I remember that now, we were talking about how people weren't showing up at the house shows all that much and I think I was saying that it was as much up to the bands to do a better job of spreading the word and making the kids feel more welcome, and you kept telling me that the bands I was using as examples weren't punk enough... It was a good discussion, though. Plus it still happens now - people put on house shows, and the kids and bands bitch and complain!

For instance, some band that played Discovery Zone a month or so ago went on their blog and complained about the house, and it was really out of line.

Yeah, at that time there were a lot of local bands that were looking to be the 'next big thing' and using the underground scene as a stepping stone. That's probably who I was referring to. I guess that's always happened and it probably always will! Anyway, I'm playing at Discovery Zone on April 1st. Hopefully it'll be a good show...it's always nerve-racking to play solo with a bunch of HC bands, but I'll survive!

Yeah, I really really want to go to that show and see Ripshit, but it's a Wednesday night or something and that's just not good for me... I might still give it a shot, though.

I think the problem is you're just not punk enough.

Obviously, as each year passes by, my desire for sleep grows larger than my desire to stay out late and having my feet stepped on by a bunch of people I don't know.

I'm with ya. For me to go out on a weeknight to see a show has got to be either a really great band that I can't see any other time or my good friends playing somewhere close. Unfortunately these occurrences happen with frightening regularity and leave me pretty worn out. Such is life.
By the way...I ran across your blog by accident, but I've been checking it out and I think it's pretty fuckin' cool. There's a lot of bands featured here that I'd forgotten about, and it's good to have this reminder.

thats because ct has/had the best punk bands in the whole world. someone had to say it.