We Were Over Here When It Was There 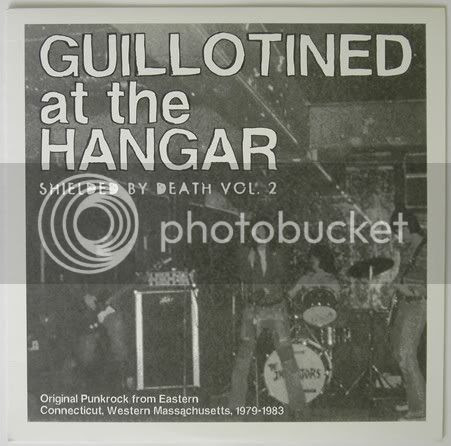 "Guillotined at the Hangar" is kinda sketchy as regional punk comps go; the liner notes are unnecessarily vague about the exact year the songs are from as well as the original releases they can be found on, and some of the bands on here couldn't spell "punk" if you spotted them the "pee" and the "you". A lot of this stuff doesn't seem all that aggressive once you realize that the first wave of American hardcore (Minor Threat, Negative Approach-- you know, stuff like that) had already hit a couple of years before a good number of the songs on this compilation were recorded.

Still, thanks go out to Keith Grave, the guy who put this comp together, as there's some worthwhile stuff here-- especially if you're a fan of Ct. punk. Keith was also in a few Ct. punk/HC bands back in the '80s, such as Sanity Assassins and White Pigs. White Pigs, in particular, were sort of demonized back then for being the first Ct. hardcore band to "go metal", although I think Violent Children may have tied them on that point.

So here's what we got:

The Reducers - The first independently-released punk album I ever bought was the Reducers' debut LP, back in 1984. The town I was living in at the time didn't have a punk record store, but since The Reducers were local and kinda well known, the chain store at the mall carried their LP. I remember that "Out of Step" was edited on the LP, so that "fucking blind" was bleeped out as "veel-flup blind", which was kinda lame. You can still find the original 45 posted on Killed By Death Records or 7-Inch Punk or one of those places, I'm pretty sure.

October Days - I've said before that October Days' "West Coast"/"Don't Give Yourself Away" and the Reducers' "Out of Step"/"No Ambition" are Ct.'s two best early punk 45s (with the Stratford Survivors also in there somewhere), so now's your chance to hear both of them side-by-side. I'm re-upping my rip from the 45 here, instead of using the weaker-sounding copy found on the compilation.

Peer Pressure - "Sound of the '80s" (recorded in 1980) is brilliant; check out Killed By Death, where the full Peer Pressure EP is posted, as well as a link to the amazing story on Break My Face about trying to track down the original members of the band.

Chronic Disorder - From their very first 7", I'm pretty sure; somehow, Jason could be running out of breath and still keep the fake British accent. Chronic Disorder were on the "Make It Work" compilation that I put out, and that's about all I'm gonna say here.

Jack Tragic and The Unfortunates - A band that's way overrated, I think ("I Kill Hippies" is not even one-tenth as good as the Deadbeats "Kill The Hippies", and that's my point), which might be why you can still find a couple of Jack Tragic 7"-ers at Brass City Records for a few fins each. Still, the imagery of lyrics like "The Dead go on about 8 o'clock/Hippies all lined up for twenty blocks" is hilarious enough to make this one worth a few listens.

8th Route Army - The only band I'm posting here that's not from Connecticut, just because the song's pretty damn good and reminds me a lot of early Naked Raygun. Never liked these guys when they were around, though. 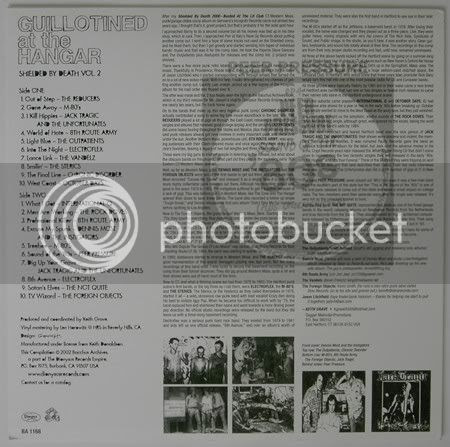 Jack Tragic and The Unfortunates - 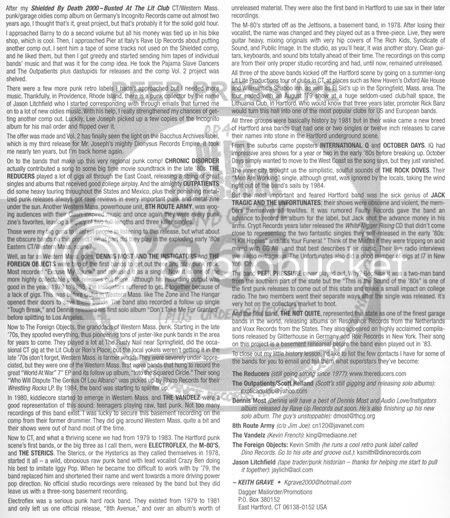 Pretty much slapped-together by Brushback at 10:50 PM

brushback -
some pretty funny stuff on your website there.
I grew up in ct, graduated HS in '82 and was in a band called Controlled Aggression. Played Ron's Place, Brothers III, ANthrax, Pogo's. Pretty early (for CT) hardcore, we started summer of 81 or so.

Anyway, I have an unreleased October Days track if you want. 'Live Forever' - you may already have it.

Blake Nelson is now an accomplished teen novalist - see http://www.blakenelsonbooks.com/.
I contacted him recently as I heard there were some October Days live tapes floating around. He didn't know about it.

Holy crap, I would love any October Days stuff, especially that unreleased track. That would be huge!

I don't think I remember Controlled Agression, though it sounds like you were a few years ahead of me-- I didn't start going to the Anthrax until '85.

Thanks for stopping by and leaving a note, that was cool!

I think the lyrics to the Peer Pressure song are classic:

They don't give prizes for the length of your song,
So I don't know why you keep making 'em long
Attention spans are so much shorter today,
Say what you need and then get out of the way