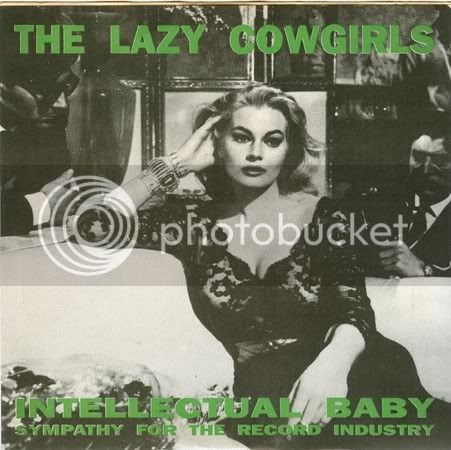 I'll admit that I was never that big of a Lazy Cowgirls fan; I saw them once, at the Anthrax around '88 or so, and owned a copy of "Radio Cowgirl" for maybe a month or two, but that was about it. Actually, the thing I remember most about seeing the Lazy Cowgirls was the opening band on the bill, a crappy all-girl band from Rochester called The Slutkillers or something that had an LP out called "...Hence The Name". From there on out, we started saying "hence the name" to mean that something really sucked. "Man, that 'Late For The Grave' LP is terrible." "Hence the name." "The new issue of MRR is shit." "Hence the name." Well, it seemed funny at the time...

The a-side to this single is a slower Stones-ish type number (hence the name!), but the b-side is a cool all-out blast, just the way God intended, and we can all be thankful for that. 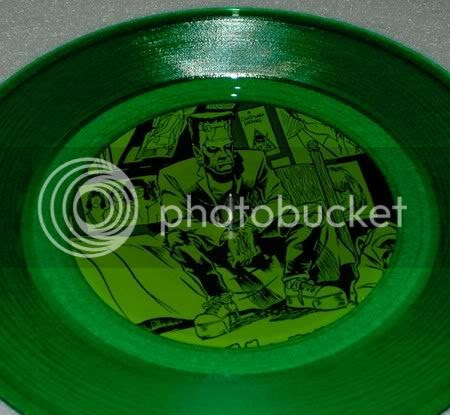 Pretty much slapped-together by Brushback at 12:14 AM

Okay. I confess. It was the cover and label which prompted me to comment on this. Some nice guitar oon this, though. And 10/10 for the pronunciation of "caaar".

The spoken word thingie as the intro was what I'd figured you'd go for.

I just picked up two Lazy Cowgirls 7"'s at the Philadelphia Record Exchange over the weekend. They were fresh in my mind after this post. No sleeve with them but I think they are from a double 7" on SFTRI because both 7 inches have the same release number on them SFTRI 122. Ones on brown marbled vinyl and the others on green translucent marbled vinyl. If you'd like to see them I'l scan em'. Can rip em' too if your interested in hearing them, unless you already have them.

I don't already have them (I'm way shy when it comes to owning Lazy Cowgirls stuff), but I'm always willing to listen to anything that rocks.

The mp3 file on this post is now a listen-only (non-downloadable) file. TOUGH LUCK, CHARLIE! No, actually, for those of you who missed the boat, I will do my best to respond to any e-mailed requests for the original file.