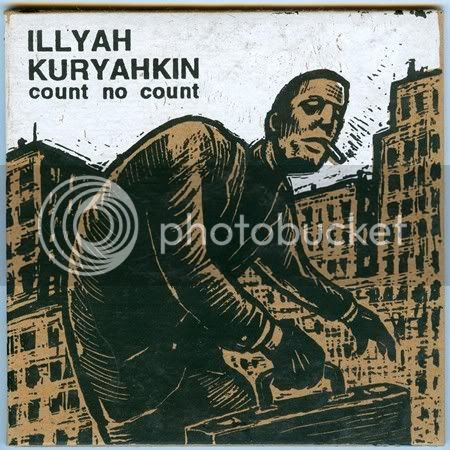 I don't remember why or where I actually bought this thing; chances are, like most things, Walt was playing an in-store copy at Brass City Records one day back in '96, and I liked what I heard enough to buy it. I'm sure I thought the screen printed cardboard sleeve was neat, too.

I didn't find out until after I bought the CD that Illyah Kuryahkin is the nom de rock of Dean Wilson, who home-records mostly droney, fuzzy rock stuff. The reason I found that interesting is because for years I owned (but rarely listened to) a flexi disc of Dean Wilson's "The Word", which was given away back in the mid-80's by The Bob or The Noise or one of those crummy pseudo-CMJ music mags. I was probably surprised that something I liked had been made by someone who years earlier I'd found to be sorta crappy, but there's no accounting for comebacks I guess. 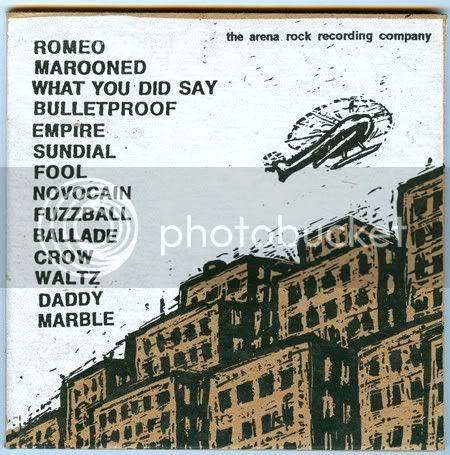 Pretty much slapped-together by Brushback at 5:59 PM

I was trying to come up with an Ilya Kovalchuk joke, but I'm afraid I failed. Cool song though.

Give it another shot. A David McCallum joke will do just as well.

This is pretty cool. Of course I am sucker for this kind of thing...

Hey. This is OK! Sadly, I wouldn't even have made the "Man From U.N.C.L.E." connection but for your David McCallum quip.

You caught me out there.

What were saying about shoegaze and 12 step recovery ?

That's okay, ib, I got suckered in by the shoegaze myself once.

Jonathan, I woulda posted more songs but the goddarn things are all 4 - 5 minutes long. I didn't want to test anyone's patience.

I'm always surprised when I click here..this was put on one of my roomate from RI brother's fledgling label, and I remember the screen printing that went on in our kitchen for this! Chances are, the copy Walter played came out of my car trunk! Brian Ralph also went on to do the Amazing Royal Crowns logo, a Harvey Danger LP sleeve, and a great comic called "Cave-In", if anyone actually cares about sleeve design anymore...I can't tell you how many calls home to NJ he had to make to get the correct spelling of this in the pre-google age!! -Sean/Wires In The Walls

Wow, that's awesome. I'm sure it was one of the copies you brought to the store, and Walt was playing it so I bought it.

I had to keep looking at the sleeve to spell "Illyah Kuryhakin", too.