Sometimes I Think It's True 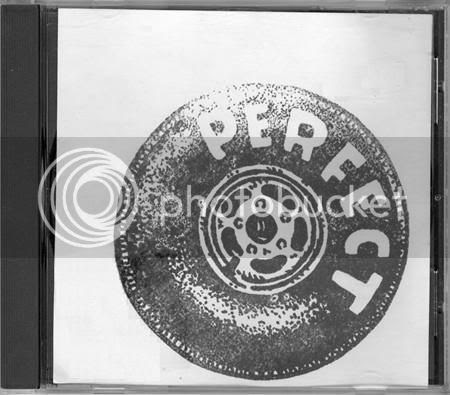 While Bash & Pop were practically soaked in the Faces and the Stones ("Friday Night Is Killing Me" is the best 98 cents you'll ever spend on Amazon, I swear), Tommy Stinson's next project, Perfect, dropped almost all hints of the 70's and barrelled along with a more 90's Replacements-style of rock.

"When Squirrels Play Chicken" came out on Peter Jesperson's Medium Cool label, which was a subsidiary of Restless, which became a subsidiary of Enigma, which was a subsidiary of Capitol or Warner Brothers or Dunkin Donuts or something and certainly not a real record label. What you see above is the "advance copy" that I got back in '96, which I've cleverly retouched to get rid of all the marks that were on it (must've dropped it in a puddle). I've never even seen a copy of this CD with the actual artwork, although if you want to see what it looks like I guess you could just Google it. (Alright, alright-- I'll do it.)

One of the funny things I remember about this CD is when Perfect played at Toad's Place in New Haven not long after it came out; the so-called music writer for the Waterbury newspaper at the time, Kellie Lambert, must've mistaken the CD title as being a part of the band's name, because in her article she kept referring to them as "Perfect When Squirrels Play Chicken". Hey, that's how I remember it, at least. I think this was also the year that Kellie asked people to send in their personal highlights for a "year in review" article, and as a joke a couple of the guys from Nevertheless wrote that Tori Amos joined them onstage at a show in New Haven to sing "Love Will Keep Us Together", and the paper actually printed it. 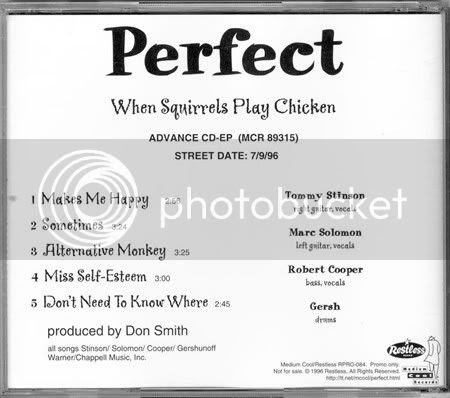 "Don't Need To Know Where" 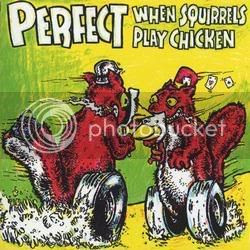 Pretty much slapped-together by Brushback at 12:07 PM

The mp3 files on this post are now listen-only files.