Something To Fall Back On 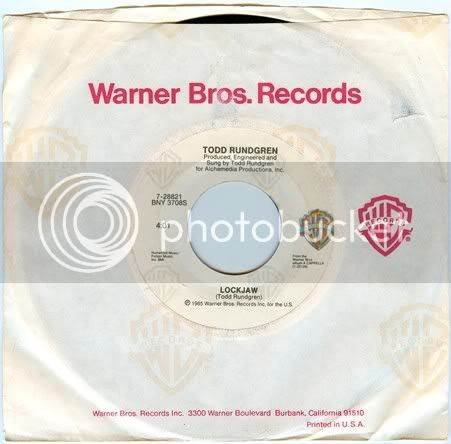 Joe Stumble just beat me to the punch on one of the records I was gonna post next, so while I fight to work my way out of a tailspin, here's some fucking Todd Rundgren for ya.

I forget exactly what year it was-- '85 or '86 most likely-- but I heard this single in Walt's store one day and bought it right then. Hey, a buck eighty-five's a buck eighty-five, right? Both songs on this 45 are from an album where Todd Rundgren made all the musical instrument sounds with his mouth. That's some totally freaky shit right there. Now, there's some Todd Rundgren stuff that's totally great, and then I've heard other stuff of his that's borderline crap (including most of his 70's hits, which kinda sound like Carole King to me), but I friggin' LOVE this single. "Something To Fall Back On" is like the greatest Pringles commercial ever made, and "Lockjaw" has some cool industrial-type noise to it, for a guy who was just using his mouth. Plus Todd Rundgren produced albums for Cheap Trick, XTC, and The New York Dolls, and you don't ever knock that shit, ever.

"Something To Fall Back On" 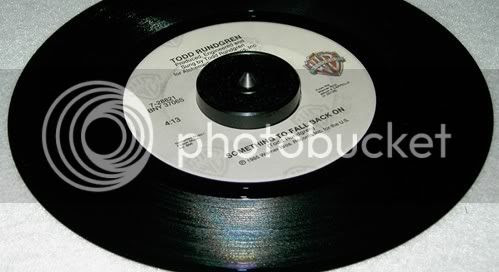 Pretty much slapped-together by Brushback at 3:00 PM

I have a bit of a soft spot for Cheap Trick too!

Despite their proclivity for the occasional really crappy recording, Cheap Trick = all time greats.

I used to listen to "Next Position Please" (the album they recorded with Rundgren) endlessly when it came out. I wish I still had a copy.

I was listening to "In Colour" and "Surrender" fairly recently. In spite of how I remembered it, the production was surprisingly muddy.

Recently, too, I heard the remastered version of "Frampton Comes Alive" - an album I openly laughed at when it first arrived. The sound on the reissue is outstanding, even though much of the material is lame.

Speaking of live stuff (Peter Frampton?!? Holy christ!!), there's a Cheap Trick bootleg called "Samurai Rock Band" that captures them live and loud in all their glory-- here's a sample:

I know they've also re-recorded "In Color" with Steve Albini, to cover up some of those production mis-steps, but it's never been officially released (you can Google it, though).

Thanks for the tip re the Steve Albini
remaster (?)! I will be looking into that, for sure. I need to clear up some HD space; I've been saying this for months, and every time I do I fill it straight back up again. Damn.

The sample kind of reminds me of Big Star, a connection I wouldn't have made off my own bat.

As for Frampton: yeah, "Holy Christ!!" sums it up perfectly - more raw ingredients for the cheese factory, sadly. More of that later over at my place.

Funny you should mention Big Star!

When I first read that, I was like, "What, that doesn't sound anything like Big Star!?" Then I remembered the "Live in Columbia" record, and it hit me that the Cheap Trick song sounds a lot like the reformed Big Star's cover of "Slut" by (whaddya know).. TODD RUNDGREN!

So there you go. The circle is closed.

Also: you probably didn't know this, ib, being in the UK, but Cheap Trick re-made Big Star's "In The Street" as the theme song for a fairly successful American TV show (for which both LX and Cheap Trick have probably cashed many much-needed royalty checks for). Strange world sometimes, isn't it?